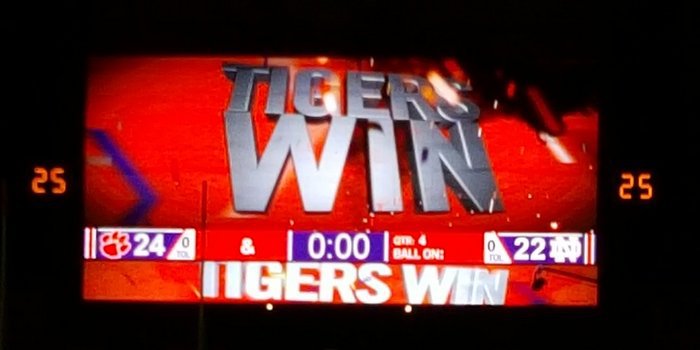 Clemson fans are excited about the Tigers' thrilling 24-22 win over Notre Dame in a wet and wild Death Valley Saturday night, but they aren't the only ones.

View Full Profile who recently de-committed from Clemson citing the desire to take his official visits.

Smith was supposed to see the game in person but was unable to make the trip from Florida to South Carolina because of the weather. However, he said he could feel the excitement all the way from Florida.

Smith said Clemson made a statement to the nation and recruits that Tigers should be considered amongst the nation’s elite.

“Statement game. Statement win,” Smith said. “People know Clemson is for real now. It was a big game for the defense and coach V ( Brent Venables

Brent Venables
Def. Coordinator / Linebackers
View Full Profile ), and if you want to be the best you have to get coached by the best and that's Clemson's entire staff”

“I think it was a great team win. The defense came up on a huge stop.”

“It was a good game! Great defense by Clemson at the end!”

“I think it’s a huge win for us. The defense held their ground on multiple series especially the last one. Offensively, we made plays, but Notre Dame just made a couple of adjustments during halftime. Overall, it was a great game.”

“It definitely showed we were for real! Deshaun (Watson) led the team with a great performance and I'm excited about my future at Clemson.”

“It was a great game. The defense played really well and the atmosphere was crazy.”

“I really enjoyed the game. The defense came through and made some big time stops. The offense jumped on them quick. It was a great team win. I thought the rain would slow some people up but it didn't. The stadium was filled with fans. One thing I heard coach Dabo (Swinney) tell the team was, ‘The fans showed up despite the rain, so you better show up to play.’”

“There’s not much you can say that would do justice to that place. It was an incredible win by an incredible team with the best fans in the nation no doubt.”

"I thought it was awesome. Clemson played great defense but just got a little tired in the fourh quarter. As a team, the played great and did what they had to do to win."