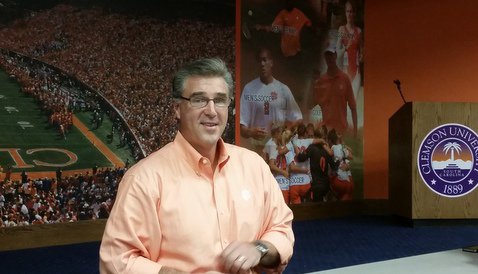 CLEMSON – Clemson Athletic Director Dan Radakovich met with the media Wednesday afternoon in the McFadden Team Room inside of Jervey, and he spent almost forty minutes covering a variety of topics, including scheduling, facilities updates and possible conference realignment.

These are a few of the bigger highlights, and we will bring you more of the story later.

The first topic of conversation, however, was about the recently announced series with Auburn that starts in 2016, and Radakovich said that the talks had been taking place for a while.

“We had been talking with Auburn for a while,” Radakovich said. “It had been a circumstance where there had been some discussions about starting the 2016 season in the Chick-fil-A Kickoff Classic, but as we looked at our schedule and Auburn looked at their schedule - so it was really beneficial for both of us - playing a home-and-home in 2016 and 2017 and then leaving 2018 and 2019 available for another home-and-home series really worked out well for us. That is mostly caused by the fact that Notre Dame will be here in 2015 and we don't go back to Notre Dame until 2020, so we had a gap there. So 2016 and 2017 worked out real well for a home-and-home, and 2018 and 2019 are what we are on the search for right now for another quality opponent to fill that slot. But we are really happy to get Auburn. It is going to be a great game.”

Other than Auburn, what other teams are you looking at?

“We are really looking throughout the entire country. Any of the big five conference teams - we are having some discussions with. Some teams are full. The Big 10 is a little unique. Some of the teams that have five home games in certain years - I don't know which ones they are but there is a certain segment of the Big 10 that will have five home games and another segment will have four homes because they are playing nine - you have to try and see which ones are available to play where. We need the home games in the odd-numbered years. But we have to see who is available and geographically does it make sense to be able to play a game against an opponent. It's not as attractive I think to go all the way out to the West Coast as opposed to finding someone who is a little bit closer. But really, it boils down to are you available to play that particular year and does it fit with the needs we have.”

What about neutral site games?

“It makes it a little more difficult because our rival is not inside the conference. So for FSU, Louisville and Clemson - whose rival isn't inside the conference - it makes some of those games much more difficult if you want to maintain the fact that you have seven home games, and that is important to us. We have been appraoched by Orlando and Dallas and Charlotte and there has been some others, but Atlanta does make the most sense. Charlotte is on the table as well. But we would rather have a high quality opponent for a home-and-home series so we can bring them here to Death Valley. “

Are you behind on the baseball stadium renovations?

“Baseball renovations are probably a sore subject with me right now, because there should be activity there right now but there's not. Come back in two weeks and there will be. There was a little bit of a hiccup there as far as costing some of the pricing of getting some of that done, but we've gotten through that. It taught us a really good lesson as far as when you get the architect on board and when you put the contractor on board. This particular project had an architect on board for about a year and then the contractor came on board. Through no fault of anyone, guys were going down one path and the contractor came in and said, 'If you're going to build this, it may cost you a little more than what you've had allocated.' For the baseball project, we've resolved that issue, we'll start construction in August and it will go through the season, so it won't be open in February, but we're trying to get the functional parts of it for the team ready right at the beginning of the year. Certainly, the new seats that will be behind home plate will be available at the beginning of the year - that's one of the first things that's done.”

Will Clemson play its home games in Greenville while Littlejohn is being renovated?

“We're pointing right now to play those at the Bon Secours Wellness Center - especially the men's. The women's were still looking at where best to give them the best advantage to play, so maybe all of their games won't be at the Bon Secours Wellness Center. There will be a lot of double headers and two game sets there with men and women - an afternoon and evening kind of thing. We're excited about the opportunity of going to Greenville and playing the 15-16 season.”

Are the basketball facilities moving forward?

“Yes. Everything from the timing and that sort of things is moving along well. We've had three planning meetings with our programming groups and the architects. They've gone really well. We'll continue to have those through the month of August and begin to kind of crystalize what it's going to look like and how it's going to be phased and the construction. It's an interesting project because it will include a practice facility for the men and women.”

Would the ACC consider a conference realignment in order to make for more attractive and even matchups?

“We will discuss that as a group of athletic directors come October. One of the things that we had to get done - and was fairly urgent - was to resolve whether we were going to play nine conference games or eight conference games. That was done in May. Once that was done, we decided to let everybody go home for the summer and come back and then look at - should we keep divisions the way the currently are, should we move to a one to 14 type circumstance where you have permanent rivals and one rotator and then go through everything else. All of those things are on the table. We'll discuss those.”