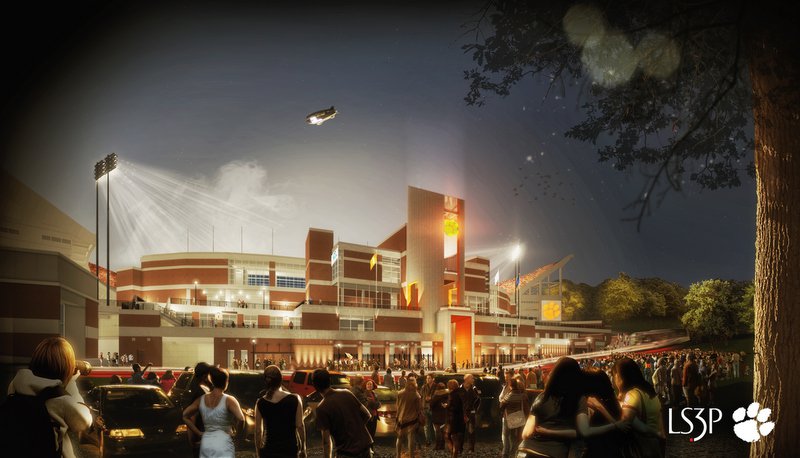 A night rendering of the WestZone and oculus

CLEMSON – The oculus is in the works.

Dan Radakovich
Director of Athletics
View Full Profile spoke to the media Tuesday afternoon in the WestZone, and covered construction plans for Memorial Stadium, Doug Kingsmore Stadium and Littlejohn Coliseum. Those plans include the oculus, changing the concourses outside of the suites and further changes to the WestZone.

“We are moving forward with a number of our facility initiatives. Although with the weather, there probably isn’t a lot of work being done on our baseball facility, that project is moving along on time,” Radakovich said. “We’re set to open some new ground level box seats for the season and then during the season we’ll be able to move into the down the right field line player development area, locker rooms, coaches offices, meeting rooms. That project is moving along well.”

Clemson fans will see a revamped Memorial Stadium next fall, including the much-anticipated oculus which won't be just for decoration.

“At the end of the football season, we’ll have two projects going on in Memorial Stadium. Number one we’ll be building out the West EndZone with the Oculus feature that was always planned,” Radakovich said. “That feature will have a practical twist to it in that it will have bridge in it that will allow fans from the north stands to traverse very easily to the south end.

“One of the things that we wanted to do when we were designing this project was we wanted to have a practical application for it because while it’s a nice architectural feature, that wasn’t foremost in our minds,” he said. “We wanted to make sure that if you park in the six or ten area, no longer do you have to walk up a hill to walk down a hill to walk up a hill and up some stairs to get to the lower north area. Now you’ll be able to come in Gate 13 and walk over the bridge and through the oculus over to the north end of the stadium.

“The other project that we’ll be working on is we’re going to be redoing all of the suites on the north side of the stadium and a building a sideline club area associated with the south side and redoing the suites on that side of the stadium. We’re going to be enclosing the concourses for all of those suites. Right now, you walk out of the suite and you’re in open air. We’ll be enclosing the concourse so it will have more of a hotel, rather than a motel feel for those suites.”

Basketball construction will begin once the 2014-15 season concludes.

“Everything is going well with the plans for our Littlejohn renovations,” he said. “That is slated to begin in May. We’re working with the architects and contracts now for that facility.”

I asked Radakovich if construction on Memorial Stadium would begin as soon as the football season ends in late November, and he said the architects have a timeline in place that will ensure construction is complete before the start of the 2015 football season.

“Both of the projects are slated to be completed prior to the 2015 season,” he said. “The projects will begin in separate areas. Both our architects and contractors on both of these projects have created timelines so that they are done prior to next football season.”