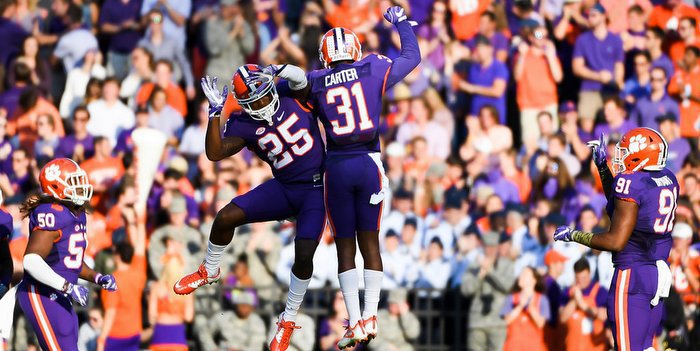 Clemson’s senior All-ACC cornerback met with the media earlier this week in the WestZone, and he talked about his future, the newest addition to his family and the rest of his senior season. His son, Cameron Isaiah Tankersley, was born in October, and Tankersley wants to make sure he does everything the right way.

“It definitely has. It's a blessing to have a new baby boy in this world,” Tankersley said. “I go out and grind every day for him. I'm trying to change his life through me. Just to have him in this world solidified what I'm trying to do this year.”

The man they call Tootie – a childhood nickname – gets to see his son every day.

“He's with his mom. I see him every day. He had a chance to spend the night with me last night, so we watched a lot of Sunday football,” he said. “I had a chance to watch T.J. Green last night and he did really well. I can play with those guys. One day, I can play with them. It's good to see guys like him compete on that level. It's fun to watch.”

He responded from a rough outing at Florida St. two weeks ago with a stellar performance against Syracuse last week, a performance he said he needed.

“I would kind of say so,” Tankersley said. “It was another game and another good test and a way to come back and compete. Syracuse is a great offense, but we had a chance to slow them down. It was a good test.”

Tankersley even nabbed his first interception of the season.

“I definitely needed that one. Score was the only thing going through my mind,” he said. “I know my ability to catch the ball so I just wanted to get the ball and go score. I wasn't able to do it, but it is what it is. It was good. Of course, they weren't really going to throw my way or they were going to throw a lot of quick passes to where I can't get to them. It's good to see other guys like Jadar (Johnson) lead the team in interceptions. He's well-deserving of it. I'm just going to get what I can and take what I can get and get better from that.”

Tankersley and the other seniors will run down the hill to the cheers of the crowd before Saturday’s home game against Pitt, and he knows he leaves Clemson a better program than the one he entered.

“This program is set basically forever. People are going to want to come to Clemson now,” He said. “We're one of the top five programs in the country. We can play the best - Alabama, Michigan, you name it. I think our coaches do a great job of going out and recruiting and recruiting guys who are fit for this program. We're going to be set here for a long time.”

What were the issues at FSU?

“Just really trying to find the ball. We were in position all night. They had some underthrown balls that were misjudged. Some didn't go our way, but it is what it is. We won the game, and we came back and got back on track this week. “

His goal for Syracuse

“I'm a physical corner, so that's one thing I wanted to work against Syracuse was playing with a little bit better hands off technique, and it paid off. It's hard because you don't want to let a man just run free. I don't like that.”

What corner does he emulate?

“It's getting emotional by the day knowing that my time here is coming to an end shortly. I'm just really trying to enjoy the moment with those guys in the locker room. Embracing these four years that I've been here has been a true blessing. I'm not going to get another opportunity like this. It's the best atmosphere in the world and I'm going to miss it. It's really surreal. If I go back and think about, it's really a long journey. Now that it's really here, everything is just flying by. We're going into the ninth game of the season. It's like we just started spring workouts last week. It's really flying by now that it's my senior year.”

What advice would he give his younger self?

“I would just say that I wouldn't really change anything. God put us in situations and we get a good outcome. I'm glad with my outcome so I really wouldn't change anything. I'm having a great career here and have learned from some of the best who have been around here - a great coaching staff. Going to Hargrave, was about getting my education and being able to graduate in December, I think I've solidified everything.”

On what his parents’ support has meant

“It's awesome to know that they've had my back ever since I was a little boy. During my freshman and sophomore years when I wasn't really playing much, they were still there. Just to have them at every single game, they have to take off work; that shows how much they appreciate what I'm trying to do for them.”