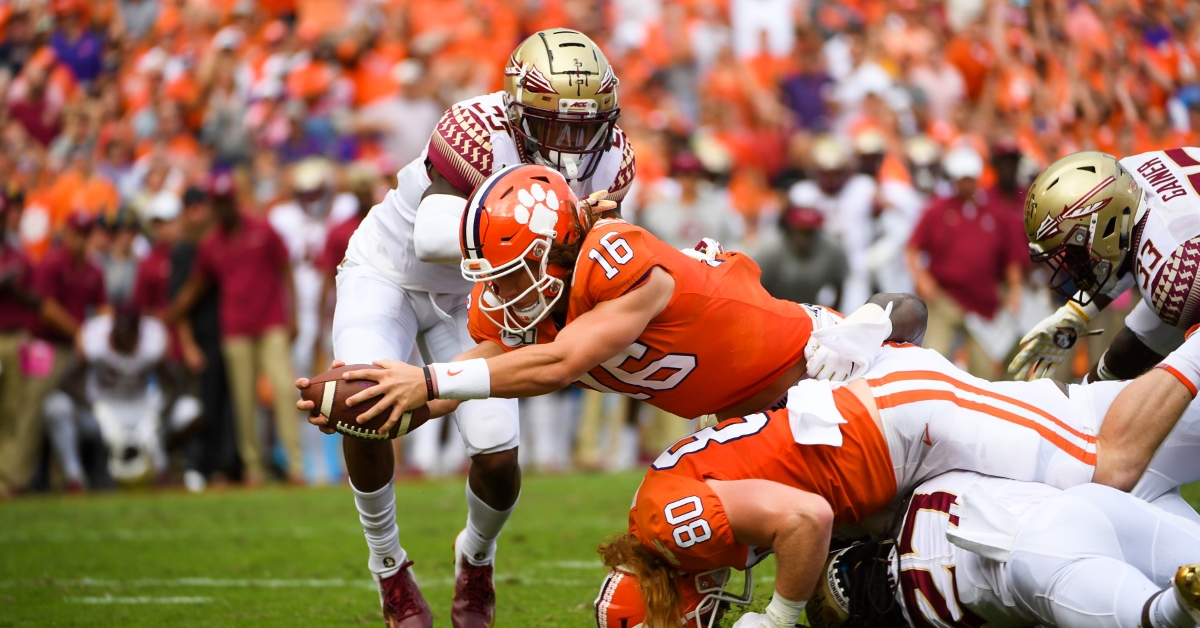 CLEMSON – The injury to Alabama quarterback Tua Tagovailoa is a cautionary tale.

Alabama was up big on Mississippi State as the first half came to a close last Saturday and no one would have blamed Nick Saban if he had taken his star quarterback out of the game. However, Saban wanted Tagovailoa to run the two-minute offense, and it was then that Tagovailoa suffered his season-ending injury.

Clemson has raced out to huge leads over the last six weeks, and the coaches have to balance their desire to get quarterback Trevor Lawrence needed work against the need to protect the franchise from a needless injury.

Co-offensive coordinator Jeff Scott said once Clemson gets a lead, the coaches do everything they can to keep Lawrence from getting hit.

"Once we get in some of those situations, we change our play-calling a little bit," Scott said. "We don't run our quarterback. We kind of protect a lot of it. But it's a fine balance, right? You want these guys to get some work. If you're not careful they play two quarters all season long, and then you get into the postseason and you're playing a four-quarter game. We want to get enough work but also have that right balance. And we have been on the same page as a staff on the headsets when we get into those situations, 'Okay, we are going to go one more drive and then just kind of be careful with some our play calls.'"

“That's coach Swinney's decision. He's in control of the personnel,” Elliott said. “When he feels like the game is under control and the guys have done what he's looking for out of them, then he'll tell us we need to get some other guys in the game. Up until that point, we're just coaching our tails off."

"It depends, if I'm ever asked what I want to do, it's like yeah let's go another series,” Lawrence said. “So sometimes they'll say that, but usually it's 'You want to go one more?' Or, it's 'Okay, you're done.' If they say you're done, then I'm not asking to go back in. It just depends. I'm sure it was similar with Tua, like do you want to be done or go back in and get one last two-minute drive in? Obviously any competitor wants to go in and play more if they can, so I would have done the same thing."

Swinney said that the coaches can’t coach scared, and can’t gameplan for when to take a quarterback out of the game.

“It's week-to-week. You don't go into a game planning that. You just play the game.,” Swinney said. “Just how the game has gone. I don't know what the score was and I think he had one series in the third quarter and I wanted to get one more series. We protected him. It wasn't a situation where we were going to run him or anything like that. I just wanted to be able to get back out and have one more good series to execute. He did an awesome job.”