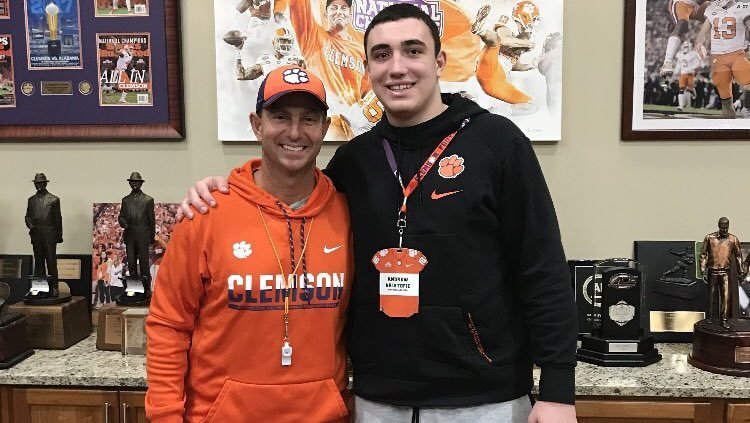 Clemson offered in early February, and Kristofic wanted to visit the campus before making a decision.

He recently visited Notre Dame and it appeared the Fighting Irish might hold a slight lead, but a two-day visit to Clemson at the end of last week has the Tigers in contention.

"The biggest thing I can say about the visit is that I had very high expectations going into it and the visit exceeded those expectations in every way," Kristofic said. "All the pictures you see of the place really don’t do it justice. Meeting everyone and talking to them, it’s easy to see why Clemson is as successful as they are. Now, I’m just in the process of making a decision."

Kristofic said his Pine Richland offense is close to the offense that Clemson runs, which means it would be an easy transition should he choose to come to Clemson.

"Yes, they run a very similar offense to our high school,” he said.

In addition to the Notre Dame and Clemson visits, he traveled to Ohio State in January. Wisconsin and Virginia Tech have also gotten his attention, as has Pittsburgh - his father eventually earned a scholarship as a defensive end and offensive lineman in the early 1990s.

Clemson was his final visit and now Kristofic is getting down to the task of making his decision from his top four.

"Clemson. Notre Dame. Ohio State. Wisconsin, in no real order right now," he said. "I don’t have a set timetable or plan. I’m going to take this time to think about everything and when I feel comfortable, whenever it may be, I’ll decide then.”