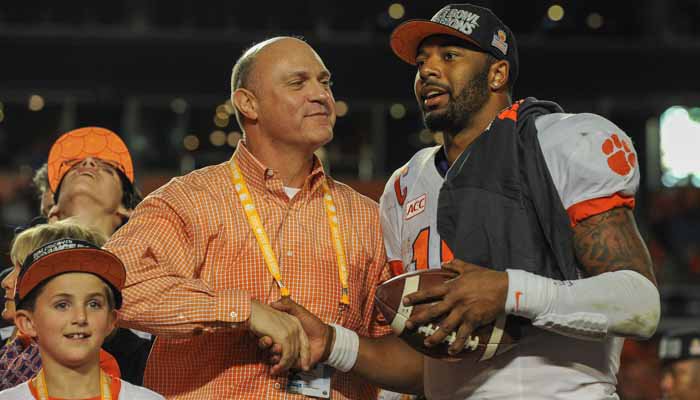 Clement's shakes the hand of Tajh Boyd after the thrilling Orange Bowl win.

CLEMSON – University presidents are always busy with meetings, visitors, and just generally trying to run institutions of higher learning, so it should come as no surprise that they don’t always want to spend their evenings or weekends and sporting events around campus.

However, Jim Clements – Clemson’s 15th – is a little different in that regard.

“Absolutely. From the days I played when I was eight years old, yes,” Clements told the media during a recent interview. “I wish I could have played at this level. Too slow. Not big enough. Not strong enough. But I love the game. And I love what it does for the university. Raises our national profile, raises our image. We have a great program, nationally respected, and really well-run. That’s in football, basketball, Olympic sports across the board. I try to get to as many games as I can. I’ve done that my whole career.”

If you see him out and about, he usually has his good luck charm right by his side.

“That’s me, that’s me,” Clements said. “The cool thing is, if you see me, I love to take my daughter Grace. Grace is a 14-year-old red-headed blue-eyed girl, curly hair, she’s a good luck charm. I don’t know that she’s been to a game where we’ve lost. So I take her wherever I can go. But I love to be there. I love to watch the game. I love to feel the energy and the environment. You’ll see me at a diving event. You’ll see me at a bunch of sports.”

During his first 15 weeks in office, there has been no shortage of excitement, especially his trip to Miami for the Orange Bowl.

“It was a pretty great first week, as you can imagine,” Clements said. “So I started on Dec. 31, the first assignment was to get on the plane and go to Miami. Unbelievable environment, great people. Obviously a great physical game and a great victory for us. So it was a great way to start. And I had a chance to meet a lot of alums, lot of friends of the university. So it was a perfect first week, could not have been better. I think that tees up this season. Top-10 finish, big victory over Ohio State, so yeah, it was good.”

Now that he has been able to really get a feel for Clemson’s athletic department, Clements said that he wasn’t at all surprised at how well the organization is run.

“Things are really well-run,” Clements said. “I would say this even if he [athletic director Dan Radakovich] wasn’t in the room, but I see him hiding back there, we have a great athletic director with a great background, great national reputation. Coaches across the board are great. We do well athletically and academically. So I’m really thrilled. That was a major attraction for me to come here, it’s a major piece of I wanted to be here.”

Not only does Clements perform the day-to-day interactions required of a university president, he also doesn’t shy away from helping out the coaches when recruits come to town.

“I’ve had a chance to meet a whole bunch of the recruits,” he said. “I’ve been to a couple of the recruiting breakfasts, had a chance to take some of the recruits up on top of the Clemson House. Show them what the campus looks like, show them the football stadium where they’ll be catching the winning touchdown pass or making a tackle at the goal line. Look, I’m here to help in any way, and that goes for all the coaches, it goes for academics as well. I’ve been out to recruit honor students and national merit finalists. Anything we can do to help the university get better, athletically or academically, I’m all in.”

Other notes from President Clements interview

“We have a great board, they love their institution, they’re all for building for the future, and that’s really what this is. Trying to make us competitive academically and athletically. So the board is very supportive. But they want to make sure we do things right. They want the best cost estimates, they want multiple levels – give me the low cost, give me the middle cost, give me the higher-end version. If I was sitting on the board, I’d be asking the same questions.”

“I’m open to a discussion of any kind of ideas. But we’ve got an athletic director who’s tracking all the issues and opportunities and happy with anything related to that. What does that mean for the campus? What does it mean for our tradition and our history, but also to get us in the right place moving forward. I’m looking forward to any of those kinds of discussions; no prediction on what any outcome would be.”

On the unionization of college athletes

“I’m involved in some of the national discussions, so I sit on the executive board of a group called the Association of Public and Land Grant Universities. So we track those kinds of things. Luckily we’ve got an athletic director who has a great team of people around him. We have a great legal team, and they’re tracking what the impact would be. So it’s early in the game to tell with that. But I think we kind of knew that discussion was coming.”

On the college football playoff and his involvement

“Wow, now you’re going for the big questions. It’s coming. That discussion’s been taking place for decades, to tell you the truth. I’m excited about our opportunities in that. That starts this year, right? So we’re walking right into it. I think it’s going to be exciting. You’ve got five major conferences. You’ve got four great teams in a playoff. So I’m looking forward to it.

“I think at any of these, you take a step forward, you try something, then we see what happens with it. I’m involved with some of the national discussions, so I’m sure there will be an evaluation after a couple years to see if we continue. But for the fans, it’s going to be pretty exciting.”