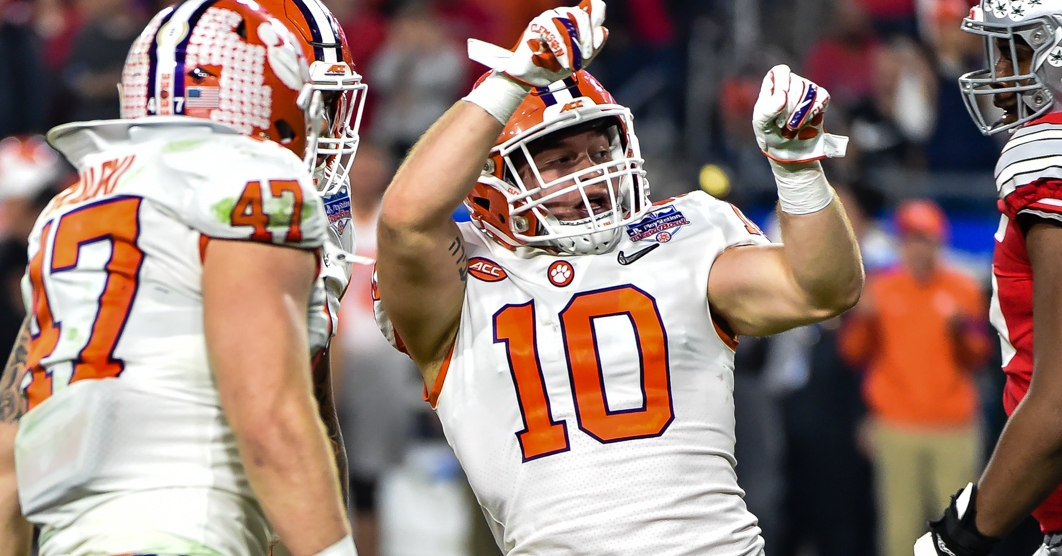 Baylon made several big plays in the win over Ohio State.

It was Spector Night at Clemson football.

Baylon enters 2020 credited with 53 tackles (7.0 for loss), 2.0 sacks, two fumble recoveries, a forced fumble and a pass breakup in 346 career snaps over 30 games. Brannon recorded three catches for 16 yards in three games while redshirting in 2019.

Quick notes from each, with full stories to come later:

*Told us he asked for the No. 13, understands it’s a lot to live up to but wants to be the next in line of great receivers who wear that number for the Tigers.

*Spector said that corner Andrew Booth is still out with an injury, but not sure what it is.

*Wide receivers Joseph Ngata and Frank Ladson are both back and can participate fully in practice, per Spector.

Ngata is at the 9-man spot with E.J. Williams and Cornell Powell. Spector had been cross-training at all three spots but is now at the 5 (slot receiver) and the 2 (field).

*When the athletes were back home, he frequently went 1-on-1 with his brother and he said his brother won his share of the battles. A former high school teammate was the quarterback at times and there were times when Trevor Lawrence – who lives 30 minutes away – would join the proceedings.

"He would try to guard me in some one-on-ones and it didn't go to well for him,” Brannon said of Baylon.

*He said he is definitely faster than his brother, but his brother says otherwise.

*He said that Derion Kendrick has been “amazing.”

*Said that he gained a lot of confidence in the wins over Virginia (nine tackles) and the win over Ohio State (two sacks and seven tackles).

“That definitely brought my game to a different level,” he said. “Overall, it was a great experience.”

*He said he has been impressed with the freshman linebackers.

“They're all young. They're all learning. And it's definitely a process,” he said. “But every day all of them come out and do the best they can do. I mean, all three of the young guys, Trenton (Simpson), Sergio (Allen) and Kevin (Swint), all have a chance. It's a lot for a freshman linebacker in such a complex defense, but I think all of them have had a great time and will continue to get better and have a great future.”

*He was at 232 before COVID and still sits there, but wants to get in the 236-238 range. Said not being at Clemson and on the nutrition plan hurt his hopes for weight gain.

*Loves to watch his brother play. Said when Brannon lived on campus last year they really didn’t see a lot of each other, because his brother is in offensive meetings and he’s in defensive meetings. Now they live in the same neighborhood off campus and get to hang out more and he feels like that has strengthened their relationship.

*Complimented tight and Jaelyn Lay, who he said is moving better and carrying his weight better. Looks more like he knows what he’s doing.