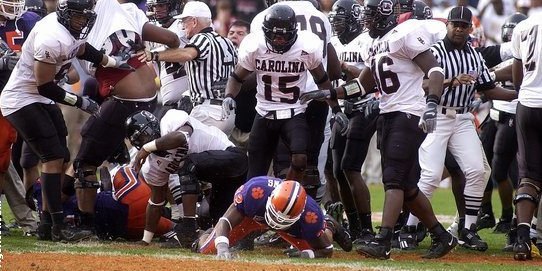 Both teams declined bids to bowl games after the brawl

The dictionary defines it as “a small usually metal cask for holding gunpowder or blasting powder.” That’s the definition used when describing the materials that wage war.

A newer definition is “something liable to explode” or a “situation that has instability.” Welcome to the 2017 Clemson vs. South Carolina rivalry game.

Tensions are already building for Saturday night’s 7:30 p.m. kickoff in a series that has been dominated by Clemson. The Gamecocks won five in a row during the Steve Spurrier era, but the Tigers have won three in a row and have outscored South Carolina 128-56 in those three games.

Factor in the fact that Clemson has been a mainstay atop the national polls, has appeared in two straight National Championship games and won the title last season and the animosity has grown. Last year’s 56-7 domination in Death Valley didn’t help matters – Gamecock quarterback Jake Bentley was held after halftime for his safety and Clemson called two late timeouts to honor its seniors.

There was also a pregame shoving match that included racial overtones, and bad blood has been simmering for over a year.

It's all reminiscent of 2004’s infamous brawl between the two schools in Death Valley. The Tigers were at the end of a stretch of domination in the series – Clemson would win nine of ten between 1997 and 2005 – and the game was the last for Lou Holtz on the Gamecock sidelines.

The famed "Malice at the Palace" brawl between the Detroit Pistons and Indiana Pacers took place the night before the football game and dominated sports' highlight shows. Then the Southeastern Conference officiating crew allowed some Gamecock players to gather at the bottom of the hill for Clemson's traditional entrance. There were some pre-game shoves between the sides, and it all boiled over with just under six minutes to play.

Both schools elected to not accept bowl bids as punishment for the brawl, and Clemson head coach Dabo Swinney threw out a warning to both sides during his Tuesday press conference.

“I certainly hope that there's not anything that takes away from the game. That would be very disappointing,” Swinney said. “It needs to be a great football game. Somebody is going to win and somebody is going to lose, it's just the way it is. Both teams have more football after this game. They're going to be in a bowl game and we've got the (ACC) championship next week and we'll at least have a bowl game if we're not going to the playoff. Both teams, I think, want to make sure they have all of their players to move forward. Hopefully, everybody will play hard, play within the rules and have a great competitive game.” 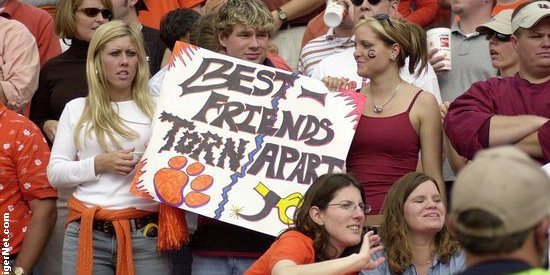 While emotions will be high, Swinney cautioned that emotion doesn’t win football games.

“It's a rivalry game for a reason. There's a lot of emotion that's tied to the game, but at the end of the day, emotion isn't going to win,” he said. “That doesn't win the game. You can get all fired up, but that doesn't win. It's players making plays. It's execution. It's blocking. It's tackling. Same thing that wins every other game wins this game. Taking care of the ball, making plays on special teams, making good decisions, throwing and catching. It's no different.”

The Clemson -South Carolina rivalry evokes raw emotion for those that live in the state.