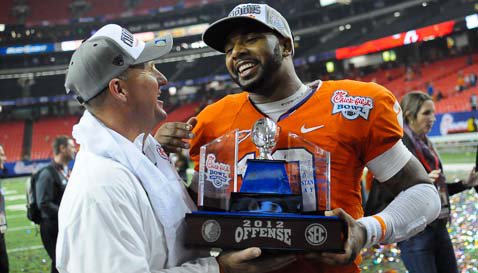 COLUMBIA – Clemson players, coaches and staff walked out of the locker room underneath Williams-Brice Stadium late Saturday night, each one picking up a bag of Chick-fil-A to eat on the long bus ride back to Clemson.

My gut reaction…….is that an omen?

Clemson’s loss to South Carolina means the Tigers now have to sit back and wait on Sunday’s updated BCS rankings and the conference championship games next weekend before having a firm grasp on a bowl destination. Selection Sunday – when everybody will know for sure where they are headed for the holidays – is on December 8th

However, Saturday night’s six turnover fiasco in Columbia made me wonder if the Tigers would fall far enough to drop into the Chick-fil-A Bowl against Texas A&M. The media watched the final moments of the Missouri-A&M game wind down, and the win by Mizzou pretty much ensures the Aggies will get the invite to the Georgia Dome against an ACC opponent (ACC (No. 2) vs. SEC (No. 5).

The college football world was turned upside down Saturday with Auburn’s improbable win, meaning that National Championship Game staple Alabama is likely out of the championship picture. Barring a loss by Ohio St. next week in the B1G Championship Game (a real possibility), it would likely be Florida St. and Ohio St. playing for the national title.

What happens after that is anybody’s guess.

Stanford – providing it wins the PAC-12 – would likely get matched up against Michigan St., and the Sugar Bowl would jump at the chance to host Auburn, even though the opponent might be UCF. That leaves the Orange Bowl – which has the first pick – and you can’t imagine they would turn down the chance to invite Alabama.

Alabama’s opponent? It just might be Clemson. The question then becomes….does Clemson deserve a BCS bid after losing two of the three big games on its schedule. South Carolina and Clemson would each have two losses, and the Gamecocks will jump Clemson in the BCS rankings Saturday, but with Alabama taking one spot and the winner of the SEC Championship Game between Mizzou and Auburn taking the other spot, the SEC is out of spots. Of course, if you’re South Carolina, the loss to Tennessee just continues to resonate.

I saw two bowl representatives exit the team’s locker rooms just before interviews were set to start, and chased them down to ask the question if Clemson would still be a likely BCS choice considering the loss to Florida St. and the loss to South Carolina. Their answers: Absolutely. Both bowl reps said that the Orange Bowl would probably love to see a Clemson-Alabama matchup in early January.

If that doesn’t work out, then it’s likely the Chick-fil-A Bowl.

Obviously, a BCS bowl game is more attractive, provides more exposure and earns a lot of money for the teams involved, but will Clemson fans – still scarred from the loss to West Virginia two years ago and stinging from a fifth straight loss to a rival – go all out to attend the bowl game.

Would Clemson fans travel to the Georgia Dome? Clemson played in Kickoff Classics in 2008 and 2012, and have played in either the old Peach Bowl or the Chick-fil-A Bowl eight times. Would an attractive matchup against Texas A&M bring fans out?

All of the questions about legitimacy and who deserves to go where are above my pay grade, and I am more than happy to just sit back and let the computers and the pollsters figure it out.

Dabo Swinney
Head Coach
View Full Profile versus his alma mater – would be great for the storylines and the chance to take on one of the nation’s elite teams.

The next week will be full of anxiety and predictions and fun. Will you travel to a bowl destination? Will Clemson flock to the Orange Bowl? Which bowl game makes more sense for Clemson? Will the Orange Bowl turn its back on an ACC team?

But let’s be honest – following the win over Georgia to open the season, the though around these parts that it was BCS or bust. Clemson could have clinched that BCS berth Saturday night. Instead, the fans will sit back and watch all of the projections and the games next week knowing that one little thing might impact where the Tigers go.