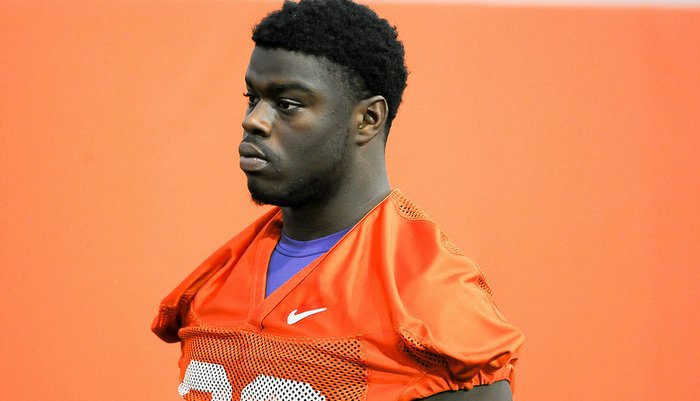 CLEMSON – The helmets and pads have been put away and the coaches are out on the road recruiting. All is quiet on the football front at Clemson, where players and coaches and fans will wait for the long hot summer to pass before football cranks back up in August.

That doesn’t mean we can’t take a look ahead – and back – to see who the starters are at each position coming out of the spring and heading into the summer.

Last week we took a look at the offense, where there aren’t a lot of surprises. Defensively, the top group seems to be set as well, even though there will be battles at cornerback and safety once fall camp arrives and there will be battles for playing times at every position on the field.

Right now, however, this is the way we see it looking:

Lawson would have started at most other schools, but has patiently waited his turn behind Vic Beasley

Vic Beasley
Defensive End (2010 - 2014)
#3 6-2, 236
Adairsville, GA
View Full Profile . Beasley will likely go in the first round of Thursday’s NFL Draft, and it isn’t a stretch to think that a strong year from Lawson could see the local kid in that same rarefied air. He has all the tools to be a dominant end, and while he might not quite have Beasley’s pass-rushing skills he has what it takes to be solid against the run and the pass.

Dodd is another one who has waited in the wings, only he’s been behind Corey Crawford

Tavaris Barnes
Defensive End (2010 - 2014)
#9 6-3, 275
Jacksonville, FL
View Full Profile . He told us during the spring that he feels more comfortable as a run stopper but has worked on his pass rush.

Reader is a new starter who really isn’t all that new – he has 110 tackles, 7.5 tackles for loss, 4.5 sacks, 21 quarterback pressures and one pass breakup in 828 snaps over 38 games (four starts) in his career. He’s also versatile enough to have played fullback on offense and came to Clemson as dual-sport athlete – he spent one year playing baseball for the Tigers as a first baseman and pitcher. Keeping Reader healthy will be one of the keys for the defense.

Watkins has also started one game in his career but has tallied 336 total snaps. He spent much of last season getting back into football shape – a car accident in 2013 derailed his season and he has told us recently he just now feels like he is completely back in football shape.

WILL (or weakside linebacker) – Ben Boulware

Boulware isn’t the biggest guy on the field. Or the fastest. But he will wow you because he plays the game hard, is always around the football and plays the game with the kind of intensity you like to see out of a linebacker. He started the bowl game against Oklahoma and has 83 tackles, 6.5 tackles for loss, one sack, two interceptions for 48 yards and a touchdown, six quarterback pressures, one pass breakup and two recovered fumbles in 399 snaps over 24 games (two starts) in his career. I give him the biggest compliment I can give a player – dude is just a football player.

Goodson is another good player who has had an NFL talent in front of him, and he’s spent time backing up both Tony Steward

This battle could last well into the fall. Wiggins has pulled the most duty at the spot, but he also played some safety towards the end of spring camp. Wiggins has 54 tackles, four tackles for loss, four interceptions for 63 yards, four quarterback pressures and seven pass breakups in 813 snaps over 25 games (six starts) in his career. O’Daniel is another athletic linebacker who has had to learn the position after playing most of his high school career at running back. O’Daniel earned increased snaps last season, and you might see him more against the run (like Georgia Tech) while Wiggins plays in passing situations.

Blanks is the one we don’t know about – we haven’t seen much of Blanks since late in 2013. He suffered a torn ACL that cost him the final few games of 2013, he red-shirted last season (it was his choice as he worked to get 100 percent healthy) and then missed this spring while recovering from another injury. How far has he fallen behind? Clemson head coach Dabo Swinney

Dabo Swinney
Head Coach
View Full Profile told me last week that Blanks will be firmly in the mix in the fall, and his experience can’t be overlooked – he has 86 tackles, two tackles for loss, one interception, two quarterback pressures, nine pass breakups, two caused fumbles and two recovered fumbles in 1,038 snaps over 24 games (18 starts) in his career.

Kearse is another future NFL talent. He improved in his pass coverage last season (didn’t get turned around as much) and improved against the run. He has added weight to room his frame and might be around 220 pounds by the start of the season. He has 122 tackles, 5.5 tackles for loss, three sacks, six interceptions for 83 yards, one quarterback pressure, seven pass breakups, one caused fumble and one recovered fumble in 1,142 snaps over 25 games (15 starts) in his career. Pay attention to him now – another solid season and he could be talking about the NFL draft after this season.

At the other safety spot, you have Green battling Johnson, a battle that lasted all spring and should go well into the fall. Green is the better athlete, but Johnson is solid against the pass and doesn’t get lost on certain routes. I expect Green to take over this spot before it’s all said and done – higher upside – but Swinney loves what Johnson brings to the table. This one will bear watching in the fall.

What else can you say about Mackensie Alexander? When we talk to defensive back recruits, they all bring up Alexander’s name at the beginning of the conversation because Alexander has quickly solidified himself as one of the best cover corners in the country. His stats weren’t eye-popping last season - 22 tackles, two tackles for loss, six pass breakups and one recovered fumble – but teams didn’t throw in his direction very often. However, he played 766 snaps as a freshman, a school record for snaps by a freshman. Alexander is another player that could be talking about the NFL draft after this season.

We heard a lot about Ryan Carter

Mark Fields
Fr. Cornerback
# 5-10, 185
Cornelius, NC
View Full Profile will come in and challenge for playing time. However, I believe the spot belongs to Tankersley at this point. He is big and physical and has experience – he has 24 tackles and 0.5 tackles for loss in 158 snaps over 25 games in his career. Can he hold off the challengers in the fall?