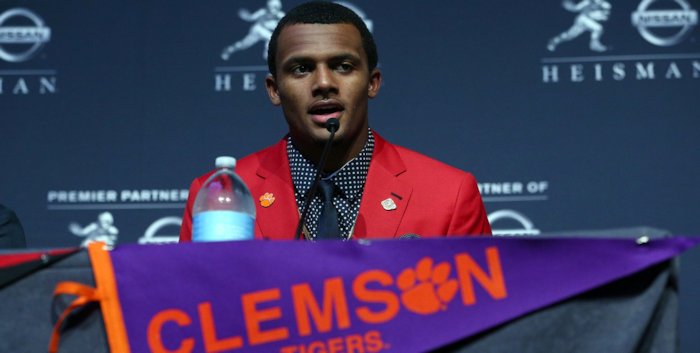 NEW YORK, NY – Moments after learning he finished third in the 2015 Heisman Trophy balloting, Deshaun Watson took a moment to look over a railing on the ninth floor of the Marriott Marquis and looked over into a restaurant a floor below. A group of diners noticed the lone figure, and a cheer and applause broke out as they recognized who they were seeing.

Amidst the applause, one man stood up and said, “You deserved it, but now go win the national title. That’s the most important thing, right?”

Watson smiled his trademark smiled and gave the diner a thumbs-up before meeting with more fans on the concourse behind him, thoughts of winning a national title still on his mind. And being legendary.

Alabama’s Derrick Henry won the award, and Stanford’s Christian McCaffrey finished second with Watson third. Watson was classy as he talked to the media afterward.

“Just congrats to him and he earned it,” Watson said of Henry. “That's what the voters wanted and he was the winner. That's pretty much it.”

He said his focus on winning the Orange Bowl against Oklahoma never wavered, but now that the awards shows are out of the way he will devote all his efforts into beating the Sooners.

“That was my main focus in the first place,” he said. “This right here was another event that I was invited to and blessed to be here. The real main focus and the main goal is to win a national championship and that's still in the front for us.”

Watson then said that the trophy doesn’t define who he is as a player or person and that he is happy he had the experience and that losing doesn’t necessarily give him more motivation heading into next season.

“Not at all. I enjoyed my time. The Heisman doesn't define a player,” he said. “It just defines how good he was that year. It's congrats to Derrick Henry and Christian McCaffrey and myself. We all enjoyed it and later on we're going to hang out and enjoy it even more. I am going to be motivated regardless of if I would've won it or not. It doesn't change my attitude. We still have a national championship ahead. Right now, our focus is on Oklahoma.

“I'm still going to have the same ambitions to be the best and try to be legendary. That's my goal. We'll just have to see about next year. Of course, I want to be back here next year, but right now I'm focused on 2015 and finishing out this year.”

Typical of the way he is on the field, Watson said he wasn’t particularly nervous in the moments leading up to the announcement.

“There were a little nerves and butterflies in my stomach, but honestly I was more nervous Thursday night at the college football awards than tonight,” he said. “I don't know why, but I just was.”

Clemson head coach Dabo Swinney also had a message for his signal caller.

“I'm still a winner in his heart and let's go get it all. We'll be back here next year,” Watson said. “That was pretty much it. Nothing changed. If I would've won it, nothing would've changed. He was going to treat me the same and say the same thing. I lost it, so he said the same thing.”

Henry’s Alabama team plays Michigan St. in the Cotton Bowl, and if Alabama and Clemson win their respective bowl games will play for the national title.

“We already said that before. We said that we want to meet up again in Arizona,” Watson said of Henry. “Congrats to him. He worked hard for it and he deserves it. I'm fine. I'm totally fine. I enjoyed the rest and enjoyed the traveling. Tomorrow we'll get back to work and get right back with my teammates and get focused on Oklahoma.”

Prior to meeting with the media, Watson also spent a few minutes with his mother, Deann, who had a message of her own for her son.

“That I'm still a winner. She told me that before we even got up here,” he said. “Win or lose, give praise to the one on top, God, and make sure you stayed focused. She knows my ultimate goal is to win a national championship and be the best college football team there ever has been. The goals are still there and we've got a chance to accomplish them.”