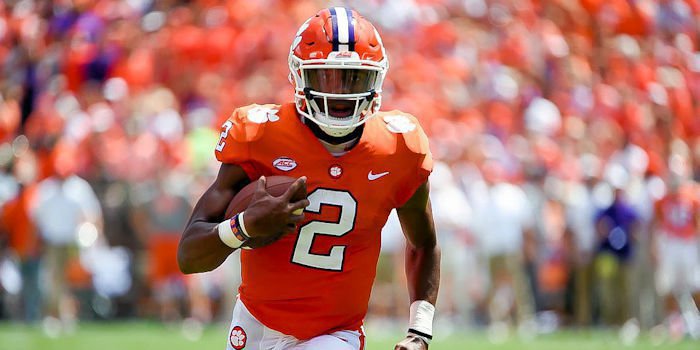 CLEMSON – A picture perfect day in Death Valley turned into a picture opening win for No. 5 Clemson.

Kelly Bryant threw for one touchdown and ran for another and the Clemson defense bottled up Kent St. all afternoon as the Tigers rolled to a 56-3 victory in the season opener Saturday at Memorial Stadium.

Bryant, in his first start since taking over Deshaun Watson, completed 16-of-22 passes for 238 yards, including a 61-yard scoring toss to Deon Cain. Bryant also rushed seven times for 77 yards. The 313 yards of total offense for Bryant broke Tajh Boyd’s record (in an opener) of 312 yards set in 2013 against Georgia.

The Tigers rolled up over 600 yards of total offense (655), including 353 on the ground. Travis Etienne led Clemson with 81 yards on eight carries. Kent St. finished with just 120 total yards - 119 on the ground and one yard through the air. The Golden Flashes attempted just four passes, completing one for the one yard. They attempted all four passes after halftime.

“I told the team that I’ve been around the game of football for a long time, but I can’t remember a cleaner performance in an opening game than the one I saw today," head coach Dabo Swinney said. "I’m just really proud of how the team showed up and played today. It was a complete performance. We played really well from start to finish. The best part was that we played 91 guys, and they all continued to play well throughout the entire game.

“The players put in a lot of work and preparation leading up to this, and it paid off. Outside of a couple of plays here and there, it was an all-around dominant performance. To see Kelly Bryant set the record for total offense by a player in an opener when he didn’t even play in the fourth quarter was impressive. It was a fun game for the team coming off of a long camp. It was something that we can really build off of.” 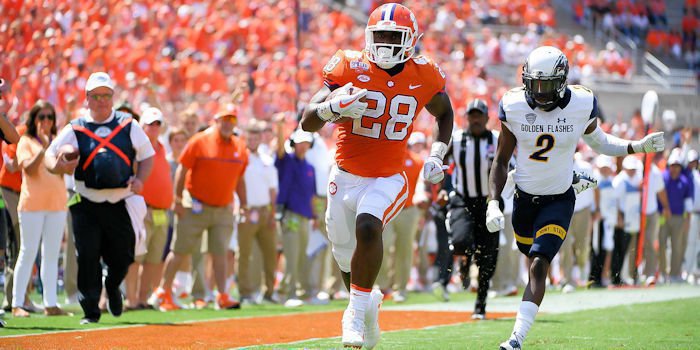 Kent St. won the toss and deferred, and the Tigers made them pay in just four plays. Bryant started off the with a 12-yard run on the first play, and two plays later hit Milan Richard on the sideline for a gain of 26 yards to the Kent St. 26-yard line. C.J. Fuller did the rest, splitting the defense with the help of a block from Tremayne Anchrum for a 26-yard score and a 7-0 lead just over a minute into the game.

Following a Kent. St. punt, it took the Tigers exactly two plays to find the endzone. Following a short pass to Ray-Ray McCloud, Deon Cain got behind the corner and Bryant hit him in stride to complete a 61-yard touchdown toss for a 14-0 lead.

The Golden Flashes went backwards on the ensuing drive, and following another punt the Tigers took 10 plays to cover 54 yards. Adam Choice burst through the middle and scored on a three-yard run for a 21-0 lead. The 21 first quarter points were the most for Clemson in that quarter of a season opener since the 2000 season when they scored 21 against The Citadel.

Kent St. put together an 11-play drive that ended with a 37-yard field goal, and Clemson led 21-3 early in the second quarter.

Clemson’s next scoring chance was thwarted by a tipped ball that was intercepted in the end zone by the Golden Flashes, the first interception of the season for Bryant. The ball was brought out by the defense to the ten, but the Flashes settled for another three-and-out and a punt.

The Tigers took over at their own 45, and they covered the 55 yards in nine plays, ending with an eight-yard run by Bryant that made it 28-3 with 1:13 remaining in the half.

Kent. St. punted on the opening possession of the second half, but it was a possession notable in the fact that the Golden Flashes attempted their first two passes of the game. Following the punt, Clemson took over at the 11 yard line, and the Tigers used a 44-yard completion to Richard that set up a two-yard scoring run by Fuller that made it 35-3 with 10:44 to play in the third quarter.

Zerrick Cooper replaced Bryant on the Tigers’ ensuing possession, and his first career attempt went for eight yards to tight end Shadell Bell. One play later, Tavien Feaster burst through the line and raced almost untouched into the end zone for a 47-yard scoring run and Clemson led 42-3 with 7:35 to play in the third quarter.

The next drive was more of the same for the Tigers. Cooper led Clemson on a 10-play, 80-yard drive that resulted in a 14-yard throw to Cornell Powell for the score. Powell caught the ball at about the five, and threaded in between two defenders for the easy score. It was the first touchdown pass of Cooper’s career, and the first touchdown for Powell and the Tigers led 49-3 late in the third.

Hunter Johnson made his Clemson debut on the next drive, and all he did was lead the Tigers on an eight play, 92-yard drive. Travis Etienne had a 54-yard run on the drive, and he scored on a four-yard scamper a few plays later as Clemson took a 56-3 lead with 11:01 to play.

Clemson hosts Auburn next week. Kickoff is set for 7 p.m.