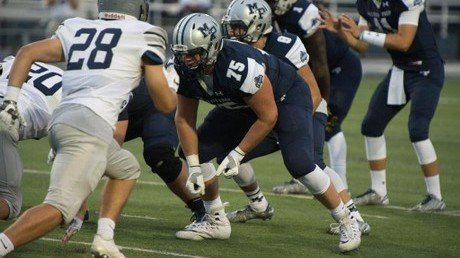 Hornibrook hopes to make it to Clemson in the near future

An offer leads to a visit.

Class of 2019 offensive tackle prospect Jake Hornibrook (6-4, 275) of Malvern (PA) Malvern Prep took recent visits to Northwestern and Stanford and thought he was done traveling for the summer. A recent Clemson offer says that’s not the case.

Hornibrook received a Clemson offer last week, a few days before his teammate, Keith Maguire, made a Friday commitment to the Tigers. The offer came from defensive coordinator Brent Venables, who was in town to see both players.

“It was cool. He stopped by and said that he liked what he saw,” Hornibrook told TigerNet. “He said I look good moving around and that he would pass it along to Coach Caldwell. Then they decided to offer, so it was a pretty exciting day. It was really exciting. I wasn’t really expecting it so I was really excited when I got the news. I’m pretty pumped.”

He has offers from Clemson, Wisconsin, West Virginia, Stanford, and Oregon among others, and now he hopes to make it to Clemson in the near future.

“We’re actually going to try to plan a visit soon. Hopefully, I’ll be able to get down there pretty soon,” Hornibrook said.

Maguire gave his verbal to the Clemson coaches last week, becoming the 11th member of the 2019 recruiting class. Now he’s hoping he can sway his teammate to become No. 12.

“He just told me that I’ve got to go check it out,” Hornibrook said. “He told me that once I go down there that I’ll want to commit. He just said it’s a great place and that I definitely have to go check it out. I’ve heard it’s a good school and I know it’s a great football program because I see them on TV. In 2017, they won the national championship. It’s pretty impressive. I just like seeing and hearing about the school.”

What does he want to see while he’s on campus?

“I would say meeting the people that I’ll be around for the next four years,” Hornibrook said. “That’s going to be the most important thing. I want to meet Coach (Robbie) Caldwell, Coach (Dabo) Swinney and all of the players.”

Hornibrook has yet to name a list of leaders, but Duke, UNC, Boston College, Northwestern, and Stanford have been the primary programs involved in his recruitment to date. He has ties to Wisconsin – his brother, Alex Hornibrook, was this past year's Orange Bowl MVP as the starting quarterback of the Badgers.

He hopes to make a decision soon.

“I would probably say early summer or late May, sometime around there. I don’t have a top list yet,” he said.

What qualities will his school of choice feature?

“I’m looking for a place that fits me. You can’t tell unless you go down and visit the place, so it really just depends,” he said. “You get that feeling when there and you’ll know once you find that place.”