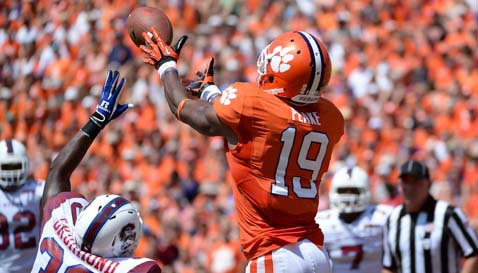 Peake had eight catches for 84 yards and a touchdown before being injured.

Martavis Bryant
Wide Receiver (2011 - 2013)
#1 6-5, 200
Calhoun Falls, SC
View Full Profile . Both Watkins and Bryant stayed at Clemson for three seasons, but each one will be picked at some point in next month’s NFL Draft.

Peake, meanwhile, can only sit and watch while his former peers take their game to the next level and his current teammates go through spring practice.

Peake had eight catches for 84 yards and a touchdown in two games last season, and appeared to be well on his way to living up to the praise that head coach Dabo Swinney and offensive coordinator Chad Morris

That all changed when Peake tore his ACL in practice the second week of September, an injury that still has him sidelined.

Earlier this week, Peake told TigerNet that the beginning of his rehabilitation was harder than expected.

“I'm not going to lie,” he said. “It hurt me a little bit. It really hit me at the Orange Bowl, standing on the sidelines watching a really good game and not being a part of it. But once rehab got started, I got stronger and everything has been going pretty good since then.”

Making it even harder was the fact that he felt so good prior to the injury, but he said he feels like he can pick up where he left off.

“During last summer and fall camp I improved so much," he said. "I feel like it's still in me, too. It shouldn't be a problem with the red-shirt and two years (of eligibility) left. That'll be on me. I think I'll build my confidence, get my cuts right and plant more off my left knee during the summer before camp gets here. I'm already moving a lot and can sprint. I'm already working on some side-to-side stuff, too. I'm going to be 100-percent by the time the summer hits. When we start drills with the team, I'll be ready."

Peake did manage to take some solace from his teammates, especially Chad Kelly

“All of my teammates were keeping me up,” he said. “They were encouraging me. Especially Chad and Sam, who had been through this before. They were telling me what to expect. That made it easier.”

Peake hasn’t been idle this spring, however; he has been keeping an interested eye on freshman wide receivers Artavis Scott

"Oh they look good, all of them. They look like college players now. Physically, they're all ready to play right now,” Peake said. “If someone goes down, one of them needs to be able to move over to a spot. We'll need them all.”

Working with the younger players has allowed him to also take on a little bit of a different role than he is used to.

“I’ve taken on more of a role of a coach,” he said. “We can look at film and see what they are doing wrong, and then we can teach them.”