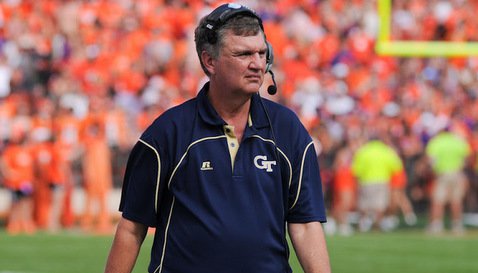 Paul Johnson likes what he sees in quarterback Deshaun Watson

Georgia Tech head coach Paul Johnson knows he will face one of the better defenses in the nation this Saturday when his Yellow Jackets face Clemson, but he said one of the real tests for his team in that game will be freshman quarterback Deshaun Watson

Watson broke a bone in his throwing hand in early October but has been cleared to play this weekend and will start. Johnson’s Jackets are 75th nationally against the run and 85th against the pass, and he said his team has struggled with quarterbacks who can throw on the run.

“Well, I think that we've struggled all year with mobile quarterbacks,” Johnson told the media this week. “I guess we're the fortunate ones that we get to welcome Deshaun Watson back, who is probably as good of a dual threat quarterback as there is in the country, especially for a young guy. We had him in our camp a couple years, and he's a dynamic athlete. He's got a really strong arm, and he's been pretty accurate. So they're going to spread you out and run their system. I mean, they do what they do. They'll run some zone reads, some bubbles, and they'll take some shots downfield. A lot of motion, a lot of window dressing. So we've just got to be sound with our eyes and play our keys and play good defense. There's no magic way to stop them, I don't think. Hopefully, we can create some turnovers. That's what we've been able to do the last two or three games.”

Johnson said that he had Watson in his camp when Watson was in high school, and he stood out even then.

“Oh, yeah, no question. It was pretty clear he was a gifted athlete,” he said. “He was in high school when he came to our camp. So there's no question that you didn't have to look long to know he was going to be a really special player.”

Johnson said the Tigers are about more than just one player, however.

“We’ve got a tremendous challenge with a team that is just loaded with four and five star players from whatever,” Johnson said. “They’ve got the number one (actually 2nd) total defense in the country, number one in third down defense. Offensively they get their freshman phenom quarterback back. I’m sure they’re excited about that. It’ll be a huge challenge for us. We are looking forward to the game. By a quirk of the schedule we had to go there for two years in a row, but we are excited to have chance to play them here in Atlanta. Hopefully we can be competitive.”

Johnson said the Jackets will have to gain yards on first and second down in order to be successful..

“The key against them is to try and stay out of third-and-long. [That’s] the key against anybody really. They’ve got some great pass rushers; he’s( Vic Beasley

Vic Beasley
RS Sr. Defensive End
#3 6-2, 236
Adairsville, GA
View Full Profile ) certainly one of them,” Johnson said. “They’ve got probably six or seven guys up there that are really talented players on the defensive front. It’s a veteran team. I think I counted on their two-deep that they had eight of eleven that are either seniors or grad students. You couple that with being pretty good players, that’s a pretty good recipe to be pretty good. And they are. They’ve played really good. I mean if you take away the first game, the second half- well really just the fourth quarter where they gave up a couple of really big runs against Georgia -other than that they’ve played really stout all year against everybody. ”

He closed by saying he knows the two programs have played some close games over the years, and he doesn’t expect Saturday to be any different.

“Yeah, we've had some great games. I was looking today, and we've played them seven times, I think, since I've been here, and they've all been -- last year they got up on us pretty good,” Johnson said. “We couldn't stop them. But other than that, they've all been close games and really close in the fourth quarter. I think this is one of their better teams. Defensively, this might be one of the best defensive teams they've had since we played them. So that's a challenge. They've got young skilled guys that are very talented, and as the year's gone on, they've gotten better and better, too. They're a very talented team, no question. Dabo's done a really good job putting this team together.”