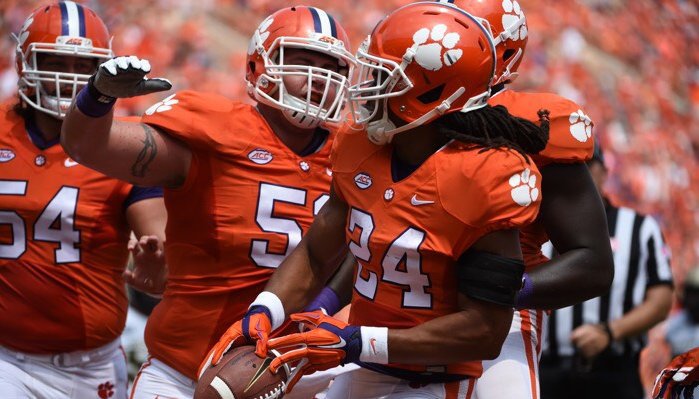 Zac Brooks
Running Back (2012 - 2015)
#24 6-0, 200
Jonesboro, AR
View Full Profile arrived at Clemson as one of the top running backs in the nation and the No. 1 player coming out of Arkansas. But instead of making an immediate impact on the program, Brooks has had to display a lot of patience during his career with the Tigers.

Brooks has done that through the first five games of the Clemson season, rushing only 12 times but gaining 106 yards, an average of 8.8 yards per carry.

He had a 25-yard touchdown run against Wofford and added a 35-yarder against Georgia Tech.

Brooks likely expected to have many more opportunities earlier in his career. He rushed for 119 yards in eight games as a freshman and had 246 yards and two touchdowns as a sophomore.

In the first game that season, he caught a 31-yard touchdown pass against Georgia to help the Tigers to a win over the fifth-ranked Bulldogs.

But last year, Brooks suffered a foot injury in the preseason and missed the entire season. He said he’s “as good as it’s going to get” with his health and is gaining his timing back on the field.

With Brooks out last year, Gallman stepped into the starting role, and he has shined in that spotlight. Brooks said he’s happy to see Gallman’s growth as a player.

Now a junior after the redshirt season, Brooks sees himself as a leader of the running back group, along with graduate C.J. Davidson

“We push each other. I try to keep the guys focused. I push them all because I’ve been here the longest, and I’m seen as a leader of the group, me and C.J. we’re the seniors of the group,” Brooks said. “And we’ve gotta keep the guys focused, and we push each other. During the offseason, during camp, everybody does their part to help and aid and encourage one another. We see each other as like a flock of geese. Every geese has his part in leading the pack. Everybody has his season. On the field, Wayne goes out there first, so he’s the first impression of us group of running backs. He represents us, and we take pride in how we represent one another.”