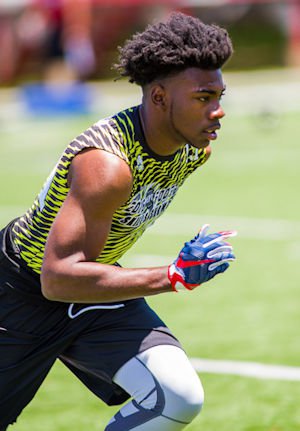 Earlier this month, the coveted 2017 prospect from Santee's Lake Marion High School, tweeted his top 10 schools, and the Gamecocks were in the mix along with the Tigers, Michigan, North Carolina State, Alabama, Notre Dame, Virginia Tech, Tennessee, Ole Miss and Mississippi State. He also has offers from Kentucky, Louisville, North Carolina and Penn State, among others.

After attending South Carolina's junior day in February, the playmaker told The State newspaper it was “an impressive visit” and said new coach Will Muschamp and staff “helped themselves a lot with me getting to come in here and learn new things.”

However, Robinson – whom recruiting services have tabbed the No. 1 or No. 2 Palmetto State prospect for the 2017 class – has been consistently positive about his interactions and regular conversations with Clemson recruiting coaches Marion Hobby and Mike Reed.

“They just say they like the way I play,” he said. “They need a safety who's going to come in and compete for a job.”

As a junior, Robinson notched 112 tackles, three interceptions, and three forced fumbles, he told TigerNet by telephone this week.

“Every time I go (to Clemson), it's just like family,” Robinson said Wednesday. “Just going up there, the family atmosphere is real nice.”

“That was a real good game. The defense played good, the offense was good, too – I really enjoyed watching it,” he said Wednesday.

“Yeah, it will have an impact,” he noted to TigerNet after a recent football camp in Newberry – “knowing they can get to a championship and hopefully win it sometime soon.”

The 6-foot, 195-pound speedster – who also has taken snaps at quarterback for the Class AAA Lake Marion Gators – said he'll focus on the upcoming season before deciding in December or January where he'll play college football. He hopes to study either engineering or psychology.

Whatever school manages to land the prized recruit will acquire an athlete brimming with confidence and a solid work ethic.

“I'm a hardworking player who's going to come in and compete, go hard every day, and just take as much information as I can from the coaches,” Robinson said.