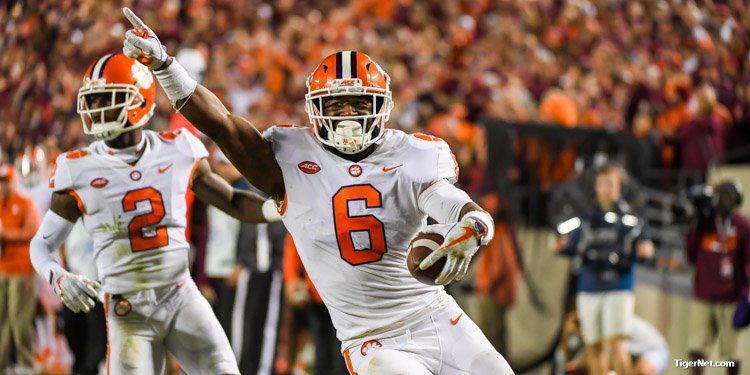 BLACKSBURG, VA – Saturday night’s game was so intense for defensive coordinator Brent Venables that he took a swipe at “get back” coach Adam Smotherman when Smotherman grabbed Venables’ shirt tail to pull him off the field.

Venables called the gesture an “out of body” experience, but the defense’s body of work was impressive in holding Virginia Tech to 342 total yards. One of their two touchdowns came after a 43-yard punt return, and the other came against a bevy of reserves, and Venables said he had fun watching it all play out.

"I'm proud of how our guys played tonight. Had great poise. Talked about it all week, to have any chance to win you have to go on the road at a place like this, you have to play great defense,” Venables said. “They were really focused and just tenacious effort. We needed that to have a chance to win tonight. I thought we really complemented each other well on both sides of the ball. Just some incredible plays and some of it you script, a lot of it you don't. Our guys, they just played their guts out and it was a lot of fun to watch."

The plan was to set the tone early and take the Lane Stadium crowd out of the equation. It worked as four of the first five Hokie drives were three plays and out.

"Obviously you can get into a rhythm. I think it really helps you and again, going on the road and be able to do that is a big deal,” Venables said. “We tried to take their crowd out of the game, particularly early. The only way you do that is by stopping them so we really tried to nourish that all week. How rowdy this place would be and they're not converting and scoring, it's a great place man. It's my first time here and it was an amazing atmosphere and they've got something special here. I always watched it on TV in admiration and it's a tough place to go play."

Leading 24-10 early in the fourth quarter, Venables’ defense put the game out of reach when linebacker Dorian O’Daniel gathered in a tipped ball and returned it 22 yards for a touchdown.

"That was a huge play. Just a tipped ball that was probably a drop and Dorian, what a timely play and Austin's fourth-and-three stop was huge,” Venables said. “We were on our heels a little bit and converting that would've made it real tough on us too and Austin's pick as well. Those are the plays, other than kind of getting in a rhythm early which I think was really critical, those three plays, in particular, I believe in the second half were all just great plays in the game.

"He kinda got lucky. It ricocheted off a face mask I think but it was good, it was good. Dorian played pretty well tonight. he's really played well. My message is: he’s a fifth-year senior. He's got talent too, but that fifth year, man. They've got that maturity, that experience to play well. Too often there's everybody trying to get guys say 'Oh there's the next first rounder.' Do you know how many good players there are out there? There's so much noise out there that try to get guys to hurry things up. He's a guy that's been patient and worked really, really hard and developed into a great player."

The Tigers are the first team in the AP Poll era to defeat three Top 15 teams in the month of September, and Venables said the challenge for this team will be in not losing focus.

"I think the biggest test will be, will they able to sustain the grind and handle success? Those things are arguably the two toughest things to handle and manage as both coaches and players,” he said. “People are going to want to anoint themselves or the outside looking in and try to anoint us and for us to not lose focus and that's going to be the challenge and you're on a good team and have a chance to have a good team and handle the success and not getting distracted. A season's hard. It's hard for everybody. It's a night game, getting home at six in the morning and you've got to get right back to work.

"Time's not going to stand still for you so you've got practice, film, you've got rehab, you've got class, you've got tutorials, you've got media attention, there's a lot. You've got a target on your chest too. Being able to stay hungry, stay focused, and sustain the grind, we talk about that all the time going all the way back to this last summer. Any good player knows how to go to work and has got that workmanlike attitude and you can't cheat this game. It'll humble you in a minute. Hopefully, our guys buy into that. That's where you don't know how good we can be. Ultimately they determine whether or not they're going to lose focus or get distracted or look ahead or listen to anybody singing their praise. It's a long, tough season.”

As for taking a swipe at Smotherman, Venables smiled and said he had no idea it happened.

"Yeah, I didn't know I did that,” he said. “Out of body experience (laughs). Intense, emotional game so yeah."