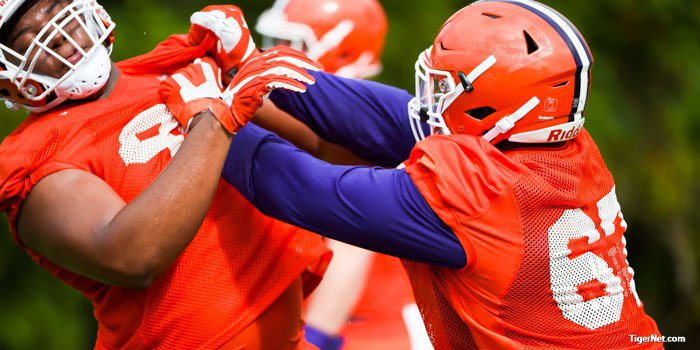 The Tigers will practice in full pads Saturday.

CLEMSON – Clemson held a two-and-a-half-hour practice for the fourth straight day on Friday, and head coach Dabo Swinney called it a tough practice as the players were in shoulder pads, helmets and shorts.

The practice was highlighted by one-on-one battles between some of the team’s best players.

The Tigers will practice in full pads Saturday.

“Today was a tough practice, a really tough practice. I think about 13 of our 21 periods were good on good,” Swinney said. “We are building the foundation of mental and physical toughness. There was good and bad after four days of installation, and we are repping a bunch of guys. But I like what I am seeing. We are going to be okay. We aren't ready to play, and we have a ways to go. The guys up front, defensively, I love their energy. The disappointing thing today was too many penalties. Too many procedure calls and too many offsides. Just not a clean day from a penalty standpoint.

“We are a team with a chance. And I tell you what, if you don't bring it you are going to get exposed out there on that practice field, no matter which group is out there. That part I like. We have a good plan in place in how we are getting them ready to go between now and when school starts. Tomorrow will be full pads, so it will be our first live work, which is ramping it up another notch as far as getting guys ready and evaluating them.”

Swinney then said that one player has stood out through the first part of camp.

The Tigers will practice in full pads Saturday. "

“I am really pleased with a lot of guys. I don't know if it's a surprise but one guy I am really excited about is Xavier Kelly,” he said. “Just right out of the gate. You never know how they are going to pick things up. Physically, it's pretty easy to look at him and test him in the weight room, but where is he mentally? Sometimes it takes a little while for the talent to show up. But he's been a young guy that has been the surprise to me. It's not a struggle for him. He's a freshman, but isn't out there and can't line up. He looks like he belongs. That is a position of need and a guy we were counting on before he got here.”

“Today I stopped practice and we had competition in front of the entire team,” he said. “I called out Mike Williams and called out Trayvon Mullen and said, 'Spot the ball. Let's go. Right now.' In front of the whole team. Then I called out Xavier Kelly and said it's you and Mitch Hyatt, one-on-one pass rush in front of everybody. Just trying to keep them uncomfortable.”

Will the return game be better?

“I hope so, in particular kickoff return because punt return is a different animal in today's world. Hopefully, we're going to be better at that. The biggest disappointment last year was that we gave up too many negative yards on some balls that we should have fielded. We don't get a lot with all of the rugby kicks and the shield punts and all of that. You don't get a lot of return opportunities. The number one job is to possess the ball. Artavis Scott got some experience. Ray-Ray McCloud is going to be a lot better. Hunter Renfrow will be another guy. Those three guys right out of the gate and then we're working Cornell Powell and Tavien Feaster. Both of them have done a nice job. They'll probably be more kick return guys at some point. I'm anxious to get some live work as we continue to build some of our scrimmages. With the people that we have, we should be outstanding in the return game. We were middle of the pack in kickoff return last year. We were close to being better. I think with the guys we've got and the guys we've got coming back, we're going to see a lot of improvement.”

“He looks as good as he has looked physically since he got here and he has done well on his assignments. He was one of the players we hoped would make strides, and he has. He had a great summer.”

*Freshman tight end J.C. Chalk was in a walking boot, but the injury is not believed to be serious.

“J.C. Chalk came down on his foot wrong when he caught a pass on the sideline, but there's nothing major that I know of right now.”

*Defensive back Marcus Edmond is day-to-day with a hamstring injury.

“It was the first day of practice. He just tweaked it, so we're holding him out right now. I'm really proud of Marcus. He's worked his butt off this summer, and he had a great summer. He's disappointed because he's competing for a job. He's not out there and those other guys are competing. He'll be back soon. We'll get him back. It's day-to-day.”

*Freshman offensive lineman Matt Ryan was also in a boot after dropping a weight on his foot.

“Matt Ryan dropped a big 200-pound weight on his toe. I think he smashed his toe in the weight room this morning. He's a freshman walk-on offensive lineman.”

“He's still progressing. He's coming along. I'm hoping maybe by the end of September that he's ready to jump in there. I don't know. I know he's in a good frame of mind and working hard and progressing each day.”

“He's been awesome. He has had a great four days. He's been competing his tail off every day. There's a great body language to him. He's worked hard. There's a different appreciation for being able to practice. He's done a lot of watching since January. I'm proud of Deon. He's done a great job. If he stays on the track he's on, he's going to be pretty special.”

*Five former Tigers are working as student assistant coaches this fall. All are in school working to finish their degree requirements. The list of student coaches includes returnees Terry Allen, Roscoe Crosby, Keith Jennings and Dymon Adams. The only newcomer to the group of Bill Spiers, who was Clemson’s punter in 1986, but was a first-round draft choice in baseball after the 1987 season. He went on to play 13 years in the MLB. His son is on the Clemson roster as a punter. This is Fantasy Camp weekend, and 44 “campers” are viewing the Clemson program up close this weekend.