Carman has a final three of Clemson, USC and Ohio St.

Just a high school senior, the Fairfield (OH) offensive lineman 6-6, 305 pounds, can play both tackle and guard and is wise beyond his years.

Balancing a full class load to be eligible to graduate early and a full football schedule, Carman wants to make sure he gets the most out of each of his official visit, which is why he’s waiting until after the season.

TigerNet traveled to Fairfield – which lies just outside of Cincinnati and about two hours north of Louisville – to see the Indians take on Lakota East last and to get our first glimpse of Carman in game action.

Not only is Carman impressive on the field – throwing defenders to the ground with one hand – but he’s even more impressive when you talk with him.

Clemson, Ohio State, and Southern California made Carman’s final cut, but he wants to wait until December before taking official visits to Clemson and USC.

“There were (thoughts of visiting Louisville for the game against Clemson), but it didn't work out with my travel and whatnot, but I still will be visiting Clemson later on this year, though,” Carman told TigerNet Friday night. “During a game, the coaches and players have a lot of attention on the game and are focused on winning the game. Me visiting in December, I'll have a better chance to be able to talk more to the coaches and having a more personal experience during the visit.”

Clemson jumped on Carman’s radar last spring when he first made the trip to South Carolina with his head coach, Jason Krause, and the Tigers have been in the mix ever since. 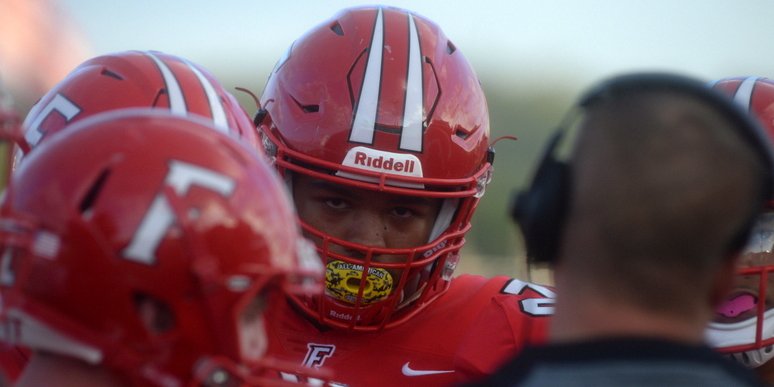 Carman has a final three of Clemson, USC and Ohio St. "

“I didn't really know much about Clemson when they first offered me, but after seeing how they've performed the last couple of years and being down there and being able to interact with the coaches, it's a great program,” Carman said. “I definitely do feel comfortable at Clemson. Coach Dabo is a great guy. He really shows his personality. All of the players, they are all really accepting. It was a good experience when I was down there. I was really comfortable.”

Most people just assume Carman will choose the home-state Buckeyes, but he said that’s not necessarily the case. However, he already has a list of characteristics he’s looking for in his final school.

“I would say that's not the case. I don't have a leader in my recruitment right now and I'm open all of those three schools evenly,” he said. “It's going to be somewhere that I feel comfortable living and that's going to be as successful as I want to be in the future.”

USC has the allure of location and academics.

“USC is a beautiful campus and has a great academic program,” he said. “Clay Helton and the whole coaching staff over there are all great coaches. It's a program that I would look forward to being a part of.”

“Ohio State has the tradition and history and it's at home,” he said.

Clemson is on a streak second to no one and already has the two top recruits for the 2018 recruiting cycle committed.

"Clemson, Dabo Swinney, and Coach Caldwell have been tearing it up down there," he said. "They're the reigning national champs. The recruiting class for 2018 has a lot of really good players - Xavier Thomas and Trevor Lawrence. They have a really talented class and it would be a great class to be a part of and we could really make history."

If Carman were to choose Clemson, he has a message for Thomas – the top defensive end in the nation.

"If I do end up going to Clemson, we're going to be working in practice every day. Just believe that. Iron sharpens iron," he said in a message to Thomas.