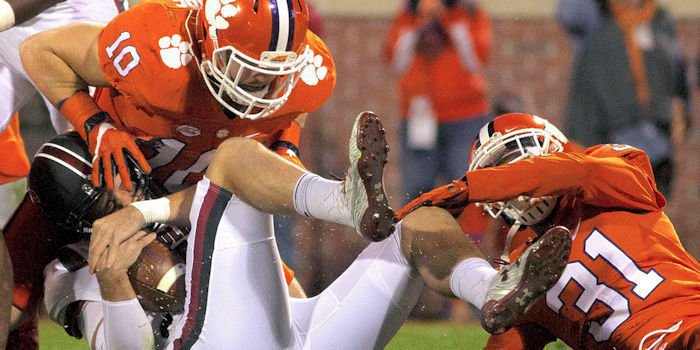 Oh Jake, I like the bravado and the machismo, but you weren’t JUST outworked. You were worked over pretty good, too.

South Carolina quarterback Jake Bentley told the media Wednesday that his Gamecock football team is using last November’s beatdown at the hands of Clemson as extra motivation heading into the season. Which is perfectly fine. He said it makes them want to work harder. Which is fine.

He then said Clemson isn’t that much better than South Carolina if at all. Well, that’s just silly, now isn’t it?

Clemson defeated South Carolina 56-7 in the regular season finale of 2016, and then went on to beat Virginia Tech in the ACC Championship Game, defeated Ohio St. in the College Football Playoff Semifinal and then beat Alabama in the CFP National Championship game.

Bentley and South Carolina played just one more game – they either lost to Birmingham in the South Florida Bowl or lost to South Florida in the Birmingham Bowl (it’s hard to keep track) – in late December. For two schools that are even, that’s quite the contrast.

But Bentley does indeed think – or says he does – that the Gamecocks are right there with the Tigers.

"We just didn't play well that week," Bentley said. "That's our big quote going into this year. We felt we got outworked, so never again. So our big thing is never again will we be outworked. Never again will we be outcompeted in a game like that. It all stems from that game because at the end of the game everyone knew that they were not that much better than us, or better than us at all. It really just lit a fire in everybody since that week. Everyone has worked harder and wanted it more."

We have a saying in the South when someone says something like that. “Bless.” If you don’t know what means, ask a Southerner. They’ll tell you, and then they’ll turn to one of their friends, cut their eyes toward you and say, “Bless.”

After I heard the statement – and again if he’s my quarterback I am thrilled he is stepping up and taking ownership and wanting to be a vocal team leader – I started to think about outrageous statements in sports like “Never again.”

But the best I could come up with was former Iraqi Information Minister Baghdad Bob, who would stand in front of the cameras during the invasion of Iraq and predict Iraqi victory, sometimes with American tanks in the background of the shot. He became a sensation overnight, and now the internet actually has a definition for a Baghdad Bob: “Baghdad Bob," now denotes someone who confidently declares what everyone else can see is false--someone so wrong, it's funny.

Hmm. Considering that South Carolina head coach Will Muschamp pulled Bentley from the game to save the kid’s life, well……..

Let’s go back and take a look at some of the numbers for that game:

*Mike Williams caught six passes but had almost as many receiving yards (100) as South Carolina had passing yards (107) in 29 passing attempts.

*Clemson led 21-0 at the end of the first quarter and 35-0 at halftime. The Tigers did everything in their power to not run up the score on the last drive, but South Carolina’s swinging door defense was having none of it, and Clemson scored with its third-string QB and a walk-on offensive lineman or two.

*And, let’s not forget the generosity of Williams, who gave piggy-back rides on a few occasions.

Jake & @bobbybentley on the #Gamecocks trying to close the gap with #Clemson & how the rivalry game's providing motivation @foxcarolinanews pic.twitter.com/LKOW4ogvkL