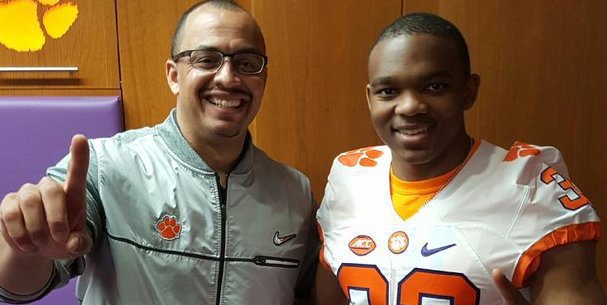 Clemson has yet to offer, but Elliott stopped by to learn a little more about the Murfreesboro (TN) Blackman 2018 prospect.

“It went well. We actually didn't get to talk,” Teague told TigerNet. “He came during our practice and he got to see our individual period and watched most of the practice. He saw inside and pass skills and all of that. I texted him and thanked him for coming and he said, 'No doubt.' He told me he thought our coaches did well and that our running backs coach did well in teaching us the right way to do things. He enjoyed it. But that is about all I know of.”

Teague visited Clemson's campus in early March and told TigerNet that Elliott wanted to get to know him a little better before extending an offer. He said he will sit down with his parents soon to make plans for the summer camp circuit, and right now he’s unsure if Clemson will be on the itinerary.

“I am not sure. My parents and I are going to sit down in about a week and make our plans for the summer,” he said. “I don't have any plans to visit right now, but maybe so later on. We will see.”

Elliott spoke with Teague’s coaches and didn’t leave word about an offer, but Teague says he understands the process. He also hopes the Tigers aren’t too late with one.

“I think it would be great to get an offer from Clemson. Clemson is a great school. If they end up offering in the next week, I don't think it will be too late. If it is after that, then I will have a little bit harder time. If it's later, then they are a school I would still be considering but it would be hard for them to be at the top.”

In 2016, Teague rushed for 2,034 yards and 24 touchdowns despite missing two games because of a concussion.

Enjoyed my day at Clemson University! Thank you for the invite @Coach_TElliott pic.twitter.com/HzItMhcxbl