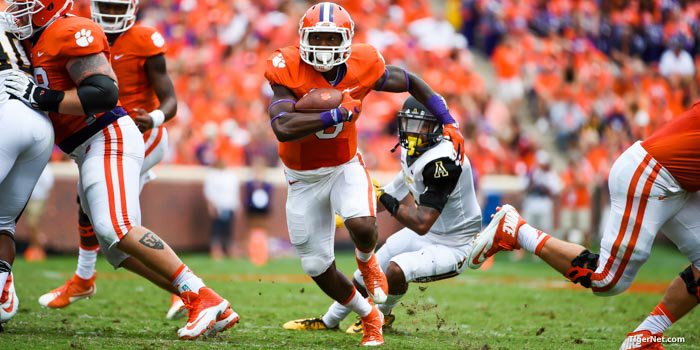 Wayne Gallman led the Tigers with 80 yards on 15 carries with 1 TD.

CLEMSON – Saturday’s offensive performance was a mixed bag for the Tigers, but Tony Elliott

On one hand, Clemson had 392 yards of total offense – 140 on the ground and 252 through the air – but the offensive line and running game struggled at times in No. 12 Clemson’s 41-10 over Appalachian State.

Scott – one of the co-offensive coordinators – said he was pleased with how the offense responded after an interception on the first drive and a sluggish start in the first quarter.

“We talked early in the week about adversity. In the first game, offensively we didn't have any adversity the entire game, and we knew from watching the video that these guys can play, especially up front,” Scott said after the game. “You have to give App. State a lot of credit. They're going to have a lot of success this year in the Sun Belt. I think the last seven games they've held offenses to 254 yards per game, so they've got a confident defense. We knew there was a chance that there would be some adversity, and we'd have to feel it out. I was proud of how the guys responded. They go out there, and the first drive doesn't go quite like we wanted. This is a new team and a new offense on that sideline - how are they going to respond? I feel like the first group responded. I'm really pleased with how the first group went.”

Elliott – the other half of the offensive coordinator duo – said he saw some inconsistency in the offense at times, but overall was pleased that they fought through the adversity to get the win.

“Without looking at the tape, I thought there was a lot of good. We were a little bit inconsistent at times in manufacturing drives,” Elliott said. “The second quarter was critical for us. We didn't start the first quarter the way we wanted to, but we found a way to win the game. They were committed to stopping the run, and they challenged us there. We've got to improve there, but overall we found a way to win. I'm proud of the guys. We had some explosive plays, so you're able to see how explosive we can be.”

Clemson has been very vanilla in their offensive selection through the first two games, but Scott said he and the staff wanted to force the running backs and the offensive line to take over the game, something that happened at times and failed at times.

“I think we've got to do better. We've got to figure out what our problems were. I think it's just one thing or another up there,” Scott said. “It wasn't something consistently on one player or one person, so there will be a lot of stuff for us to teach off of. Scheme wise, they were very similar to Oklahoma, and they were going to have seven guys around the box. They were going to have their guys make you throw the ball, and in this kind of game we wanted to force ourselves to run the ball. There were times that we ran the ball and typically we would just keep taking what they were giving in the passing game. We really wanted to challenge the guys up front and the backs and give them some work. We've done too good of job in the first two games and in fall camp, and I feel like we'll get that corrected and have a good plan on Thursday night.”

Despite the offensive performance, Elliott said he is still confident in what the offense will able to do at Louisville Thursday night and over the course of the rest of the season.

“I didn't lose any confidence today. We know what we're capable of. We've just go to commit to it every day in practice and practicing to the standard to come out and perform to that standard,” Elliott said. “Louisville is going to be a heck of a task. I think our guys will be ready. It's s short week, so it's a quick turnaround. It's going to be about the commitment level we have on and off the field to get ourselves ready. It's a good opportunity for us to go in and coach these guys hard, but there are a lot of positives.”