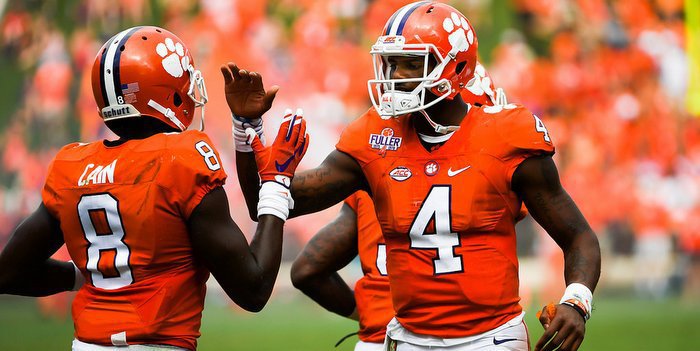 Deon Cain and Deshaun Watson during Saturday's win over Troy

There has been a lot of talk about the struggles the Clemson offense has faced in its first two games – albeit wins – as the offense hasn’t been able to get into much of a rhythm.

The NCAA’s statistical rankings back up that talk.

While the Tigers are tied for first in winning percentage with the other 48 undefeated teams in the country, the offensive numbers aren’t what many expected from that unit entering the season.

The Tigers are 41st in passing offense (270 yards per game), but that is the only major offensive category in which Clemson is in the top 50. Clemson's rushing offense is ranked 92nd at 136.5 yards per game.

Two key numbers for the Tigers have been tackles for loss (tied for fourth nationally at 11 per game) and turnovers forced (tied for sixth with six).

While quarterback Deshaun Watson was one of the national leaders in just about every offensive category last year, his numbers have been pedestrian to open the season. He ranks in the top five in only a few categories so far.

Deon Cain and Deshaun Watson during Saturday's win over Troy "

Clemson’s special teams have been solid through the first two games, and the Tigers have two individuals who lead the nation in a special teams stat. Greg Huegel has made all five of his field goal tries to tie for first nationally in field goal percentage, while Ray-Ray McCloud is first in punt return average at 32.0 yards per return.

Sacks allowed: Tied for seventh with 0.5.

Tackles for loss allowed: Tied for 22nd with four.

Fumbles recovered: Tied for 49th with one.

Punt return defense: Tied for 47th with 4.0 yards per return.

Receiving yards per game: Williams, tied for 28th with 99.0.

Passes defensed per game: Jadar Johnson, tied for 11th with 2.0.

Tackles for loss per game: Kendall Joseph, tied for eighth with 2.5.

Field goals per game: Huegel, tied for fourth with 2.5.