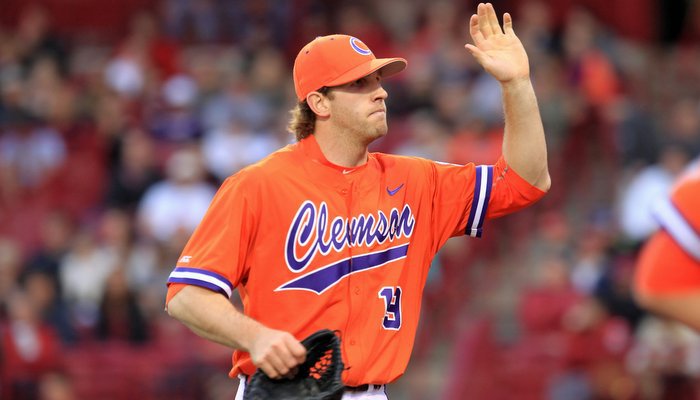 CLEMSON – Monday around Clemson was one of those days, and a lot happened in a short amount of time. About the time the Clemson football team commenced its 2015 spring practice under gorgeous skies in Clemson, the Clemson baseball team started play against arch-rival South Carolina in Columbia.

Both events proved to be a huge success, and the Clemson football team walked off the practice fields at about the same moment Brody Koerner got the last out in Columbia in the Tigers’ 7-0 dismantling of the Gamecocks, giving Clemson the series win two games to one.

There are plenty of thoughts and nuggets still hanging out there from yesterday, so let me dive right in and start with baseball. It was a big series win, but more importantly I kind of like what I’ve seen out of this team early in the season.

I wrote in a board post following Saturday’s 4-1 loss – directed at the “Fire Everybody” crowd that I thought Clemson had a shot to win the series. During the loss Saturday the Tigers pitched well and hit several line drives right at people. South Carolina, on the other hand, had several balls that were hit in the right spot. Sometimes it’s your day and sometimes it isn’t, and anybody who knows baseball knows that.

Has this program turned the corner and now everything is bright and rosy? Nope. There are still a lot of games to play and we have to see how they fare against the stiff competition in the ACC. But at this point you have to like the young hitters and the pitching staff has been outstanding. If they keep on playing the way they have been, it could be an exciting season around here once again.

Now, on to football. We didn’t get any of the coaches following Monday’s practice but we should get head coach Dabo Swinney

We were allowed to speak with D.J. Reader

Kearse (who told us he is 6-4, 217) told the assembled media that he was more than willing to be one of the leaders on the defense. In fact, Kearse went as far as to say he thinks there won’t be much of a dropoff for this year’s defense. Reader said the same thing, and he told us that he thinks there are plenty of leaders on the defense because so many of them have played significant snaps over the past few seasons.

*Reader also told us that he broke his toe lifting weights, but he didn’t drop a weight on it. He actually dropped the bar. He said that when it first happened he didn’t think too much about it – he said it felt like someone had stepped on it – and that even after he got the x-rays back he wasn’t overly concerned. However, the soreness grew over the next week and he has been told to take it easy the first few days of camp. He was in a green jersey Monday.

*Charone Peake looked as good as I have seen him in a few years Monday. Following practice, I told him that and he agreed that he feels better now than he has really at any point over the last two seasons and that he feels like he can help the offense this year.

*If you haven’t had a chance to watch the video of the Watson interview, go watch it. The kid has poise beyond his years.

Trevion Thompson
Fr. Wide Receiver
#1 6-3, 191
Durham, NC
View Full Profile is the “typical 9-man Clemson receiver” and that he thinks Thompson will be a breakout player this season. Thompson certainly looks the part, and someone remarked to me while watching them practice that Thompson looks like a Williams’ clone.