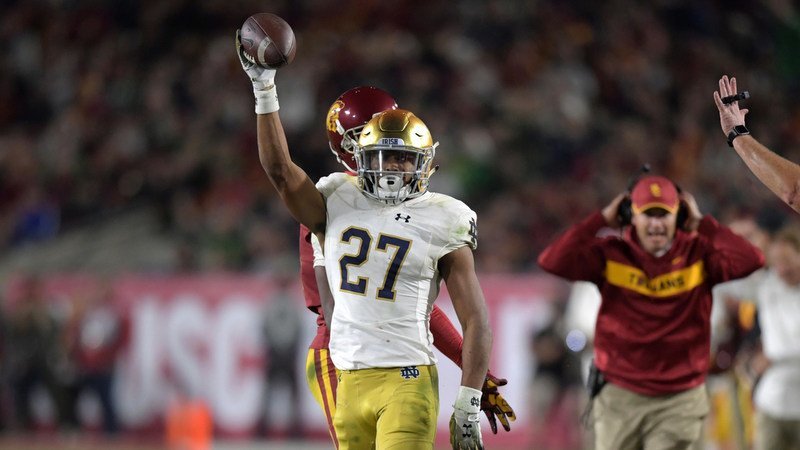 Love helped save the day for the Irish in the win over USC (Photo by Kirby Lee, USAT)

ATLANTA, GA – Notre Dame junior corner Julian Love has put together a stellar season in South Bend, earning a spot on the Bronko Nagurski Trophy Watch List and was a finalist for the Jim Thorpe Award. Love has started all 12 games, making 61 total tackles with three fumble recoveries and set a season-high with 12 total tackles in the road win over USC to close out the regular season.

TigerNet caught up with Love at the College Football Hall of Fame in Atlanta last week for a 1-on-1 conversation, and he broke down his thoughts on Clemson, the Cotton Bowl matchup against the Tigers and the season he’s had for the Irish.

“It's been a long time coming. Two years ago, my freshman year we were for 4-8, and we didn't know what it meant to win in college football. We didn't know what it took. And then the next year you see a shift, and we're 10-3 the next year, and it's like, alright, we know what it takes. We are getting our feet under us, and we have a lot of the same players, and this year we knew that we had a lot of talent coming in. We knew that it was going to require our full attention each game, and that's what was hammered into us. All through offseason training, all the runs we did and all our crazy workouts. We knew that it was for a goal and the goal was to be 12-0. You always hear about it - everybody comes by and always tells a story about winning championships at Notre Dame, and everyone wanted to be part of this team. It feels great to be 12-0.”

How much did you know about Clemson coming out of high school?

“Not much. I'm going to be honest with you. My senior year in high school was the game where there was the hurricane down in Clemson. It was crazy and I was like, wow, this is a battle. Two pretty good teams that year. Really, both were great teams that year and they were battling. My roommate is Troy Pride, who is the other corner on the team, is a South Carolina kid (and played for Clemson great Will Young at Greer). We always watch a little bit of the Clemson games before or after our games, so we know what they're about. They're tough. They play an ACC schedule and they, for the most part, dominated that because of how tough they are. They're gritty and they have the right components and the right coaching. And I think that's what you see when you watch Clemson play. Just that grit factor in their game.”

What players stand out on the Clemson roster?

“I'm not going to go into them, but obviously, you see the D-line and you've got Christian Wilkins and Dexter Lawrence. Two competitors. I mean, you got a Trayvon Mullen at corner. He's a competitor. You've got a young quarterback who is very talented. Trevor Lawrence, he gets all hype deserves. He's young, but he's handled the spotlight very well. And then you've got (Travis) Etienne. He's a special player because once he gets going, he gets going. They have a lot of components in the right areas. That's what great teams do and they know how to work well together and they've been dominating all year.”

Did you want to play in the Cotton Bowl?

“There's a little bit of that, you know, you never know how people place Notre Dame. There's a certain perception when you hear the name, Notre Dame. So, we always are like, alright, we know we're in, or at least I knew we were in and it depends on where. Personally, I wanted to play in Dallas. I just I think it's a calmer atmosphere and sort of more of a business-like approach with fewer distractions. And I mean I wanted to play Clemson. I think we match up very well with them. They're a tough team. They have been to playoffs so many times already in the short history of playoffs, and I wanted to play them. I think we match up well. When we're at our highest point, I think we can exploit some of the things that they do, if we're playing at our highest level.”

What stands out about this matchup?

“I think it's special. Clemson has performed at the level we are trying to get back to. We have been trying to get back to for a couple of years now. They had Deshaun Watson and that era. But we have a lot of talent on our team. I think it's an old-school powerhouse and a new-school powerhouse clashing, and it's going to be a great matchup. I think everyone that's watching is going to really enjoy the game.”