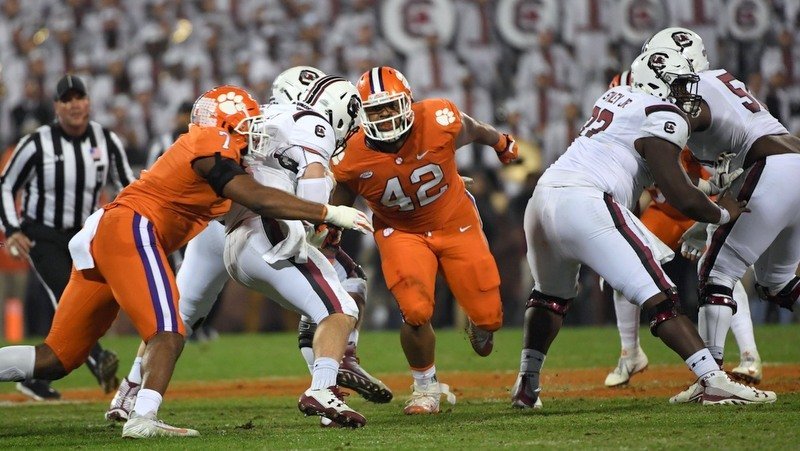 We won't see the Gamecocks and Tigers in Death Valley this season. (Photo by Joshua S. Kelly / USATODAY)

Nothing screams “2020” quite like the collective gasp across the state Thursday afternoon when it was learned that Clemson won’t play South Carolina in football this season. That’s right, the annual rivalry series against the Gamecocks will have to wait another year. It's just another thing to not like about 2020.

When the teams face off next season (Nov. 27th), it will have been 2,919 days since the Gamecocks have claimed a football victory in the rivalry. If you’re the type that likes to count, that is 7 years, 11 months, and 28 days.

The series is the longest continuous non-conference rivalry in the nation, with the teams playing each year since 1909. The only longer consecutive rivalry is Minnesota vs. Wisconsin (it’s a conference game), who played for the 113th consecutive year last season.

Clemson would have been looking for a seventh consecutive win this season (and would more than likely have been prohibitive favorites), which would tie for the longest such streak in the series (Clemson won seven in a row from 1934-1940).

The ACC announced Wednesday that it would play 10 conference games this season, plus one out of conference game played in the state of the conference schedule. I was told the conference was “very purposeful” in the way the schedule was presented – it gave the SEC the opportunity to preserve this rivalry and other ACC-SEC matchups in Florida State/Florida, Kentucky/Louisville, and Georgia/Georgia Tech.

Clemson AD Dan Radakovich was disappointed in the decision on the rivalry not being played this season.

"It's unfortunate that we will not be playing Clemson this season but that wasn't our choice, it was a league decision,” Muschamp said. “That's a game that is important to our program, our institution and our state, and one that President Caslen and Coach Tanner pushed hard to make happen. I look forward to renewing the rivalry in 2021."

To say that not playing the game is disappointing is a massive understatement. The first rivalry game I saw in person was in 1989, the famous orange pants game that was the last hurrah of former head coach Danny Ford. The game marked the first time that Ford allowed the players to wear orange pants on the road and Clemson rolled to a 45-0 win that could have been a lot worse.

My second game in the rivalry I actually covered for the now-defunct Greenville Piedmont. It was memorable in more ways than one. I rode with another writer and his car started to run hot in traffic on the interstate. His car limped into an hold service station (no longer there) on Huger St. and the man that owned it told him that he needed a new thermostat. We called a cab, and a one-eyed cab driver with a huge rooster tail (at least four feet tall) tied to the trunk of his car picked us up and ran the wrong way down one-way streets and through yards, but he got us to the game on time to see Clemson win 16-13.

Everybody has a favorite memory, no matter which side of the state you prefer. Both sides have had their moments, and even though it hasn’t been close in recent years, it’s still a rivalry game and there is always hope that the underdog can pull off the upset.

A colleague that works for a newspaper wrote last year that rivalry has lost its luster, and I teasingly told him that he shouldn’t invite bad karma into the mix. Turns out I was right, and I hate it.

Not playing this game is just another thing to not like about 2020.