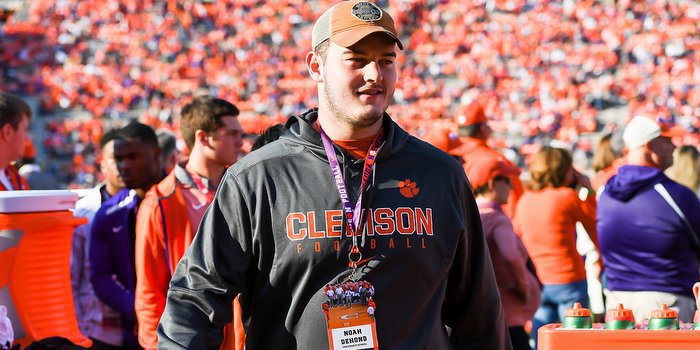 DeHond will be on campus for the spring game

Business trip. Vacation. Just another chance to get to Clemson. Whatever you want to call it, Noah DeHond had a good time.

The big offensive tackle and 2017 Clemson signee out of Highstown (NJ) The Peddie School was back on campus for one of Clemson’s spring practices last week, and he told TigerNet that the visit had everything he wanted.

“It went great and I had a blast,” DeHond said. “I think we brought some of the cold weather with us, but it was nice to get back down. I just texted (coach Robbie) Caldwell and told him I was on spring break and I wanted to come down to watch some practices. I wanted to get one last vacation in with my mom before I move in and spend some good time with her.”

It was a chance at a small vacation, but DeHond used it for other purposes as well.

“It was also a business trip for me and trying to get some of the basics of the offense down and learn some of the names of the plays,” he said. “I want to learn as much as I can as quick as I can so I can contribute as soon as I can.”

Because he’s not enrolled in school, DeHond can’t take part in practice or meetings, but with Clemson’s new football operations center, there was no time spent being bored.

“It was awesome. I don't think anyone could ever get bored in there,” DeHond said. “Since I'm signed, I can't sit in the position meetings, so they'll go to meetings and I'll go bowling, try out the golf simulator and it's a really fun place to hang out for the next four years.”

What was his favorite part?

“The bowling alley to be honest,” he said. “I didn't realize how good I was at bowling. That's just the inside stuff. I didn't have time to do the outside stuff like Wiffle ball or basketball.”

DeHond spent time with future position coach Robbie Caldwell, who had one message for the 6-7, 325-pounder.

“He just says that if I come in in shape and hit the books, then I'm going to have a really good chance to compete for a backup role. That's what I'm planning on doing,” he said.

“That was absurd how good it is. It's ridiculous. All of the young guys are killing it,” he said. “I was talking to Blake (Vinson) and Hunter (Johnson) and they are getting adjusted and getting settled in. They are having a blast. I was watching Hunter on a few plays and that kid is something with the ball. Blake is doing really well, too. Obviously, I didn't watch as much as the defensive side of things, but, the early enrollee thing - they are benefiting from that. They are dedicated kids. They are going to be real role players for us this year and game changers down the line. I'm going to be at the spring game.”

DeHond says he will be back on campus for the spring game.