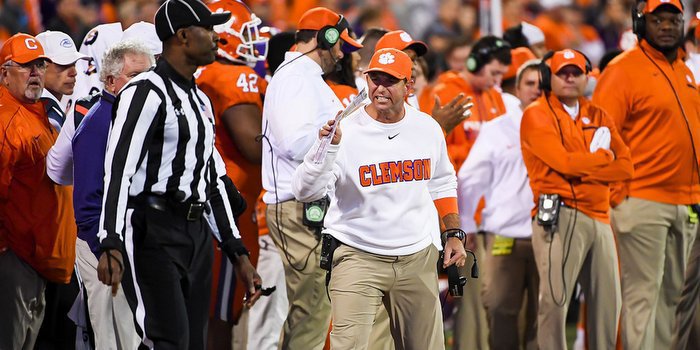 Swinney screams at an official during the loss to Pitt

CLEMSON – A turnover-plagued loss to Pitt last Saturday ended several winning streaks for the Clemson program, and tight end Jordan Leggett told the media Monday that he feels like the some of the pressure that built during those streaks has abated.

Head coach Dabo Swinney doesn’t agree with that statement, and he said Tuesday that he is used to winning and expects to win.

"I think that's a sexy answer after you get beat. You have to come up with something that sounds good,” Swinney said of Leggett’s answer. “I spent 13 years at Alabama. This is my 14th year at Clemson. I don't know anything but ‘we’re supposed to win.’ . There's a pressure to win every week, and I love that. I love that pressure. I embrace that. Always have. To me, there's more pressure when you're really not expected to win. There is more pressure that comes when you're really not good enough.

“That ain't the pressure I like. I like the pressure of knowing you have a good team and you're expected to win. That’s all I’ve ever known. My whole life, when we’ve lost, we’ve tried to get better. When we’ve lost games here we’ve responded. Two years ago we lost a game down there at Georgia Tech when Deshaun got hurt. People were wondering how we would win with Cole Stoudt and all he did was win MVP of the bowl game. We’ve built this windshield mentality in the program. What’s next? How do we learn from it? That’s what we focus on and that’s all that matters.”

Clemson went 12-0 in the regular season in 2015, and won both the ACC Championship and the Orange Bowl to improve to 14-0. The streak ended with the loss to Alabama in the title game. The Tigers started 9-0 this season before dropping a 43-42 decision to Pitt on Senior Day, but Swinney said the loss will be forgiven if the Tigers win out. 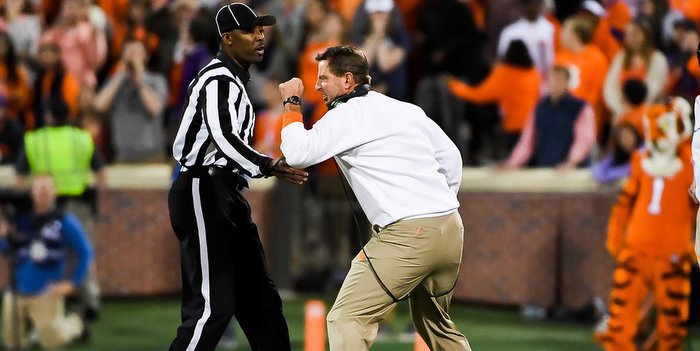 Swinney screams at an official during the loss to Pitt "

"It's hard to go undefeated. Even Alabama last year, we both walked off the field 14-1,” he said. “That (Pittsburgh) game is just part of our journey. The story isn't done. It's hard to go undefeated, it really is. When they dropped the confetti on the Tide they didn't go, yeah but you lost to Ole Miss. They handed them the trophy. You just keep playing. Ohio State lost to a Virginia Tech team early. They just kept playing. Control what you control. When the journey is complete, you own every part of it. Then you write the story."

Swinney knows the Tigers will have to win out in order to qualify for the College Football Playoff, but he said that the team won’t feel any added pressure. Why? Because they expect to win and because every week is a playoff game in the world of college football.

"Playoffs have been started all year. Everybody says we need to add three more layers of playoffs,” Swinney said. “We played 15 games last year. How are we going to add more games? Something has to give. Every week is a playoff game because it all matters. It truly matters. It matters had we lost to Troy the second game of the season. It all matters. I think we've got a good system. But for us, every game is a playoff and every game is the biggest game of the year.”