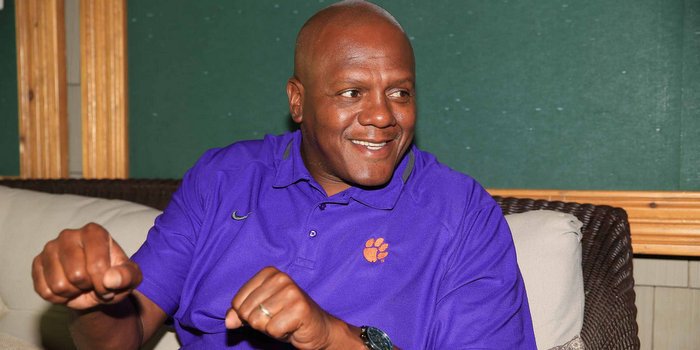 SUNSET – Most college football coaches will tell you that they don’t lie or exaggerate when recruiting high school players, but Clemson defensive ends coach Marion Hobby can prove it.

Hobby has another tough task ahead this season. He has to replace starters Shaq Lawson and Kevin Dodd – Lawson was selected 19th in the first round of the NFL Draft by the Buffalo Bills and Dodd went 33rd overall to the Tennessee Titans.

The Tigers were second nationally in sacks last season with 48 and led the nation in tackles for loss with 126. Dodd and Lawson were a big part of those numbers, combining for 24 ½ sacks and 49 tackles for loss.

Next up are sophomores Austin Bryant and Richard Yeargin, redshirt freshman Clelin Ferrell and true freshman Xavier Kelly. Bryant and Yeargin combined for 2 ½ sacks last season, but both will be expected to put up bigger numbers in 2016. It’s a talented group, but they’re young, and Hobby told TigerNet last week that the proliferation of younger players on the defense proves he doesn’t tell tall tales on the recruiting trail.

“Well, one thing I always laugh at is, especially when I tell Austin (Bryant) and Clelin (Ferrell) both, ‘We don't lie when we are recruiting. I told you both last year when we were recruiting you that you had a chance to play early.’ I told them that we had two guys that were going to be National Football League guys, and you are going to be in the mix early,” Hobby said. “It was recruiting talk, but I told them to write it down.

“They understand what's at stake. A lot of it has to do with scheme and what we do with the front four. We put pressure on those guys to come in and make plays for us. They've accepted some challenges. It's fun. It's fun to watch.”

Hobby said Bryant and Ferrell have put in the work to be great players.

“They've been in the weight room, and they look different. It's just the maturity of them and the way they talk, and the way they walk around,” he said. “They both came in with a great work ethic, and it's been great seeing them grow. I was looking at a picture of Austin and me when we were on the sideline at camp last year when he was a recruit, and then I saw him the other day, and he's a totally different guy. He has matured really fast. That's always exciting to see.”

Yeargin made a splash with a devastating hit on Oklahoma running back Joe Mixon in the Orange Bowl win over the Sooners, and Hobby says that experience will only help the Florida native this season.

“He had a good spring and played a lot of snaps last year at the end of the year, which I think was good for him. He's kind of in the situation that (Kevin) Dodd was in,” Hobby said. “He had some numbers there in front of him - Dodd was here and then a young kid named Shaq Lawson signed. You think it's your turn but then you have these young kids coming in, and they take off. It's kind of like, are you going to push forward or are you going to level off? I think he's headed upward. I don't think he's leveling off.”

Kelly, a 4-star prospect out of the state of Kansas, could also work his way into the rotation, and Hobby used that as further proof he tells recruits the truth.

Another option at end is defensive tackle Christian Wilkins, who slimmed down to 310 pounds and took snaps at end in the spring. However, Hobby believes that Bryant, Yeargin, Ferrell and Kelly will all have a say in whether Wilkins stays at tackle or moves outside.