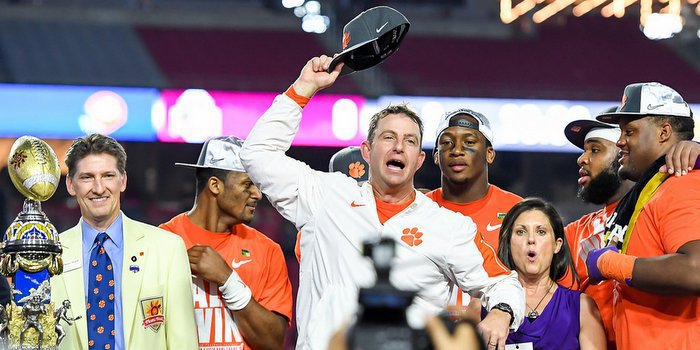 Swinney has the Tigers poised to win it all

GLENDALE, AZ – The next step is a National Championship.

When Terry Don Phillips took the interim tag off of Dabo Swinney’s job title and made Swinney the head coach at the end of the 2008 season, Swinney had a particular first goal in mind: win the division. Once that hurdle was reached and conquered, the rest of his goals would start to fall into place.

Now, there’s one goal left, and that can be taken care of with a win against Alabama next Monday night in Tampa. If it happens, Swinney will remember the journey he started back in 2009.

“We've been on a journey since '09. You've gotta do something once,” Swinney said after the Tigers’ 31-0 thumping of Ohio St. in the Fiesta Bowl. “And it seems like once you kind of knock the lid off whatever barrier it is that you think is in place, then you can do it again. And I know in '09 we were just trying to win the division. Golly, if we could just win the division. And we did. Now we've got five division titles. And then it was, like, okay, can we just win 10 games. Boy, wouldn't that be great?

Once the dominos started to fall, it became a chain reaction that is still being seen today.

Swinney has the Tigers poised to win it all"

“And the '12 team beat LSU. The '13 team won BCS, beat Ohio State. Every team has its own thing and own responsibility,” Swinney said. “And that was kind of the message to these guys is their responsibility is a little bit bigger but it's all based on what's happened before them. Because C.J. Spiller can't come back and play. Boy, he would if he could. And I'd like that. But he can't.

“But it's a combination of all those guys that we're benefitting today in 2016 because of a group of young people and the commitment they made in '09 and '10 and '11 and '12 to help us build this foundation, because it's not like we were at the top of the world.”

Swinney said the national narrative regarding the Clemson program is changing, but he still sees times when the program doesn’t get the respect he thinks it deserves.

“We've been ranked up there in the top five for a long time. So I definitely think that the narrative has changed with our program,” he said. “But still seems like we're always the underdog when we get in these big-type games for whatever reason. But until you win one, there's really only one thing for us to do.

“We had a lot of work to do. And it's just -- it's just fun for me to share that with all of those guys that have come through our program and our coaches and everybody. Because it's been a special journey. And we're all benefitting from that foundation.”

Next up? That elusive national title.

“We've done about everything that you can do multiple times. But we have not been able to win it all. But you gotta get yourself in position to do that,” Swinney said. “And so now we're starting to hopefully we can be a little more consistent with these opportunities and find a way to get it done.”

The Tigers were close last season. This season, they want to finish.

“We get an all-expenses-paid trip to Tampa to play Alabama,” Swinney said. “So that's going to be another tough week of preparation and get ready to play the best team in the country in Alabama. They've earned that. But you can best believe we're going to show up. And we're going to lay it all on the line and see if we can find a way to finish.”