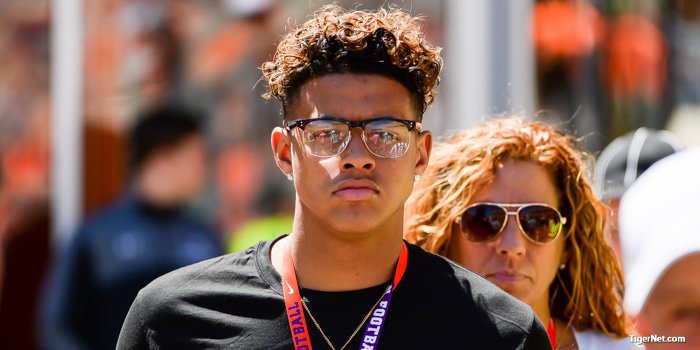 Galloway on the sidelines before Saturday's spring game

It didn’t take long for Braden Galloway to find his happy place.

The 2018 tight end out of Seneca (SC) visited Clemson Wednesday and picked up an offer from head coach Dabo Swinney and tight ends coach Danny Pearman, and then he returned for Saturday’s spring game.

Saturday is when he decided it was time to end his recruitment, and he called Swinney Saturday night with the news that he was ready to become a Clemson Tiger.

The 6-5, 220-pounder told TigerNet shortly after announcing his decision that he’d been mulling a commitment since the initial visit, but he wanted to make sure he was thinking with his head and not just his heart.

“I had been thinking about it since Wednesday. I just wanted to make sure I wasn't making any decision off of emotion,” Galloway said Saturday night. “I wanted to make sure that it was a place that I could see myself over the next four to five years and be able to contribute and be a part of the team. Mainly, I wanted to be happy. I called Coach (Dabo) Swinney, and the first time he didn't answer, but then he texted me and called me back. He was screaming when he was on the phone. He was happy. I'm happy, too. I'm glad I decided to do it tonight. It's just a blessing.”

There were several things that stood out to Galloway on the visit, but none more than his interaction with Swinney.

Galloway on the sidelines before Saturday's spring game "

“The main the thing about Clemson is that I've been growing up there my whole life, so I know it. It's seven miles from my house, so that's a big part of it, too.,” he said. “I wanted to be able to stay close to my family and to be able to play football for a high-level team. The main thing that convinced me to commit was not just Coach Swinney as a coach but him as a person.

“I like the way he interacts with his players and the way he's able to get players to reach their full potential, but doing it in the right way and not forcing. He gets them to be the best that they can be. I knew that before they offered me and once they offered me I already knew they were at the top of my list and there was just no reason to keep waiting or keep playing with the recruiting process when you know it's the place. It was just the best move for me.”

Saturday’s Orange & White Game and the fan support only further cemented his decision.

“I loved the crowd. It was amazing. It's crazy to think that there were 60,000 people there just for the spring game,” he said. “It's ridiculous. That shows just how dedicated the fans are. The recruits, we were signing autographs and stuff. I signed three autographs and after I signed one I had to take it to Xavier Thomas for him to sign. It was nothing but fun. It's like the fans are trying to recruit you, too, and that just makes you want to go there even more. I love the fans.”

He said he’s excited about joining Thomas at Clemson.

“It's just a blessing. I got to talk to Xavier a little bit today,” he said. “He was really excited that he committed there. I was excited for him because I know a few guys down at Wilson where he used to go to school, and that was just great for him. I'm proud of him. The game was fun, and I enjoyed getting to talk to all of the recruits.”