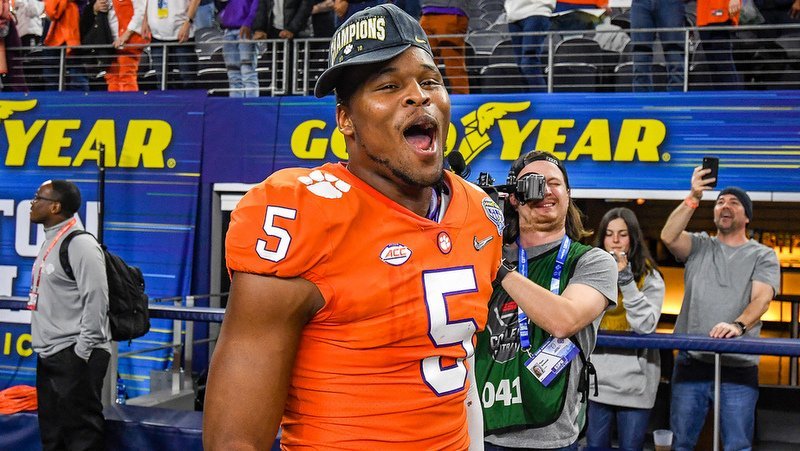 The national champs are back at it – spring practice started Wednesday – and head coach Dabo Swinney said it’s easy to turn the page to a new season.

“We have so many new faces that you have to turn the page quick. I think that this really helps us do that,” Swinney said. “We’ve got a lot to accomplish in different areas, but for me personally, it’s chemistry, it’s leadership, it’s the little things. It’s getting these guys to have good football IQ’s not just for their position but within the scheme of their offense and defense.”

Swinney said the coaches were able to concentrate on the new season once the team returned from California, but the start of spring practice puts all of the planning into motion.

“It’s a long season. There’s a lot going on afterward and then you have a bunch of new people, and coaches are on the road in January,” Swinney said. “They’ve done a nice job, and I feel like we kind of got on the same page and put our eyes forward several weeks ago in our team meetings, but today helps even more so because now you get to come out here in a team setting and you have to go do it. It’s funny though to look out and see a lot of new people in different roles. We ran out that first group defensive line today – holy cow - it was pretty neat. But, I’ll tell you what, they did a really great job.”

There is no doubting the talent that is on hand, but perhaps the biggest question mark is how to replace so many senior leaders.

“It’s critical. I think that the most underrated things on any team are chemistry and leadership. It’s as simple as that,” Swinney said. “It’s easy to look at a roster and see talent and experience and all those things. Leadership and chemistry – it’s not as easy to see that. That’s nurtured, it’s taught, it’s developed – there’s a lot of things that have to go into it. It’s a huge, huge priority for us. We have a lot of it in certain areas; it’s just in a different spot. I think we have unbelievable leadership in the secondary right now. That linebacker group and the leadership that we have right there is strong. That’s a very good group. Our receivers, our running backs, our offensive line, our quarterbacks.

"We have it in a lot of areas, but we have to grow some guys in those areas in the defensive line. Who’s it going to be? You don’t need to be a senior in order to be a leader. The day Christian Wilkins got here he was a leader. From the time he got here, he was a leader. We’ll see. It’s a process that you have to go through, but it’s critical between now and August when we get back together that that starts to shape and emerge in some guys.”

Swinney then named off some of the players he is looking to take over the mantle of team leader, including linebacker Shaq Smith.

“I think (Gage) Cervenka is a guy that’s a leader in all areas. He can cross over and lead defensively. I think AJ (Terrell) is a guy like that. I think (Tanner) Muse and K’Von (Wallace) are guys like that. I think (Isaiah) Simmons is. Shaq (Smith) is an unbelievable leader. Shaq is one of the most respected guys on this team. We do some internal things that give me really good feedback on what our DNA is - kind of a DNA test if you will - that I do every year to see where we are and what the team’s thoughts are.

"Even though he hasn’t played as much, Shaq is one of the best leaders we’ve had. He’s an incredibly committed guy on and off the field – he’s a great student, and he’s amazing. We have several guys that I think are ready to do that, they just haven’t had to do that because we’ve had a lot of dominant personalities. But, we have a bunch of guys that I think are excited. John Simpson is a guy that is going to be a great leader. (Tavien) Feaster has been amazing. Amari Rodgers. We have a bunch of guys that fit that category.”