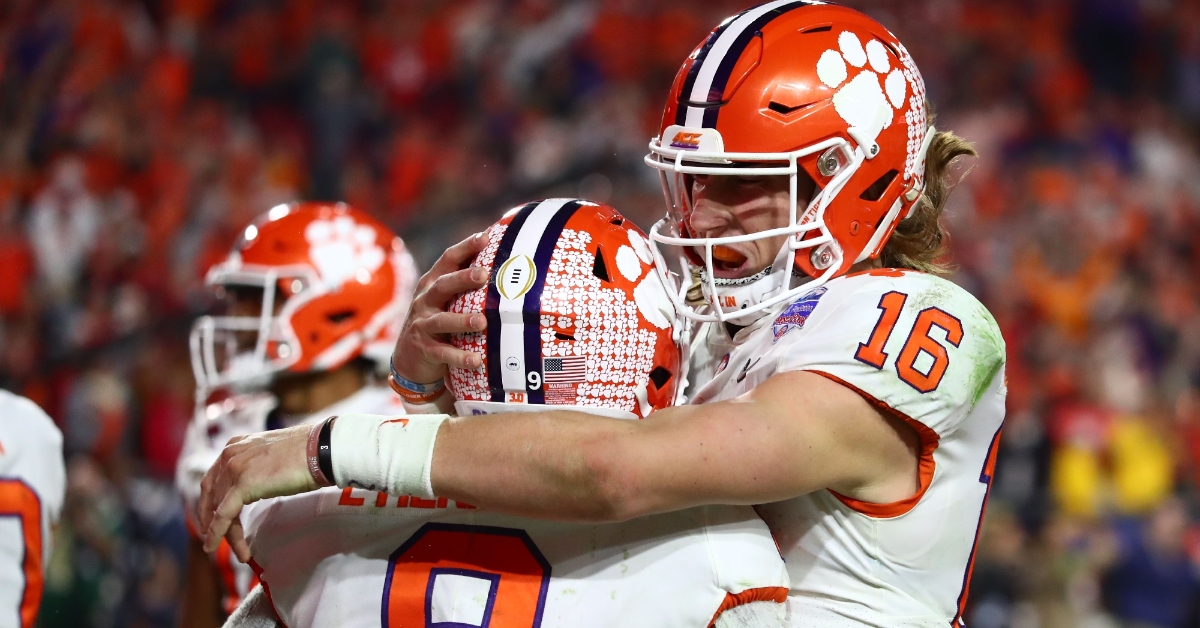 GLENDALE, AZ – The Tigers were left for dead more than once Saturday. After a demoralizing first quarter and after Ohio St. looked to be putting the game away in the fourth quarter. Champions respond, however, and the Tigers acted like champions.

Trevor Lawrence threw a 34-yard scoring toss to Travis Etienne with 1:49 to play and Nolan Turner intercepted a pass in the endzone with 37 seconds remaining as the No. 3 Tigers overcame a 16-0 deficit and defeated No. 2 Ohio St. 29-23 in the College Football Playoff Semifinal’s Fiesta Bowl.

Clemson advances to play No. 1 seed LSU on Jan. 13th in the Superdome in New Orleans for the National Championship.

The win was the 29th in a row for the Tigers.

An Ohio St. punt pinned Clemson at its own six-yard line with 3:07 to play with the Tigers trailing 23-21. An 11-yard pass to Ross and an 11-yard run by Lawrence got the Tigers out of the hole, and then a 38-yard pass to Amari Rodgers put Clemson at the Buckeye 34-yard line.

On the next play, Lawrence hung in the pocket and hit Etienne on a crossing route and Etienne outran the defenders 34 yards for the score. The Tigers went for two and Lawrence’s pass to Higgins in the back of the end zone gave the Tigers a 29-23 lead with 1:49 to play.

The Buckeyes drove down the field in a hurry and reached the Clemson 23-yard line after a Field run. The Buckeyes called timeout with 43 seconds left. Out of the timeout, Fields threw towards the middle of the end zone and the pass was intercepted by Nolan Turner to seal an incredible win.

The Tigers got off to a bad start in the first quarter and things got progressively worse. The Buckeyes drove down the field for an early field goal and a 3-0 lead. The Buckeye defense forced a Clemson punt and then Dobbins broke off a 68-yard scoring run and it was quickly 10-0.

The Clemson defense forced a punt on the third drive, but the Tiger offense went three-and-out to five the ball back to the Buckeyes. Dobbins then broke off a 64-yard run to put the ball at the Clemson eight on the last play of the first quarter. Clemson once again held the Buckeyes to a field goal for a 13-0 deficit, but the offense continued to struggle and gain first downs. That led to another Buckeye field goal at the 7:20 mark and Ohio St. led 16-0.

The Tigers took over at their own 25 and put together a drama-filled scoring drive. On the sixth play of the drive, Lawrence was sacked on third down and stayed on the turf in obvious pain. It looked like the Tigers would have to punt, but Ohio St.’s Shaun Young was called for targeting and was ejected. The call gave the Tigers a first down and Chase Brice came in for one play.

A pass interference penalty put Clemson in the redzone for the first time all night, and three plays later Etienne burst around right end and then turned upfield for an eight-yard scoring run. With just under three minutes to play in the half Ohio St. led 16-7.

The Tigers forced a punt and it was all Lawrence on the next drive. A third-down completion to Ross put the Tigers at their own 43, and Lawrence took off up the middle, broke a tackle and then outraced the defense to pay dirt for a 67-yard touchdown run, the longest run of his career. Late in the first half it was 16-14 Buckeyes with the Tigers on the prowl.

Both teams punted on their first possessions of the second half, but the Tigers took the lead on their second series. The drive started at the one-yard line and appeared to stall after just one first down. However, punter Will Spiers was roughed on the punt – two players ran into him – and the Tigers had new life. A 17-yard run by Lyn-J Dixon set up a screen pass to Etienne. Lawrence dropped back and flipped the ball to Etienne on the left side, and Etienne took it almost untouched into the end zone for a 53-yard scoring play. Five minutes into the second half Clemson had its first lead of the game at 21-16.

It was just the third 99-yard scoring drive in Clemson history.

The Buckeye offense continued to struggle – Isaiah Simmons even picked off Fields late in the third quarter – but the Clemson offense also failed to get an traction. Ohio St. finally put together a scoring drive that ended with a 23-yard scoring pass to Chris Olave. The play was on 4th-and-1, and with the Tigers expecting a run Fields hit Olave over the middle. With 11:46 to play Ohio St. was back in front 23-21.

Clemson once again failed to gain any offensive traction and Ohio St. put together a drive that looked like it could end the game. The drive reached the Clemson 39 but stalled, and a punt pinned Clemson at its own six with just 3:07 to play.