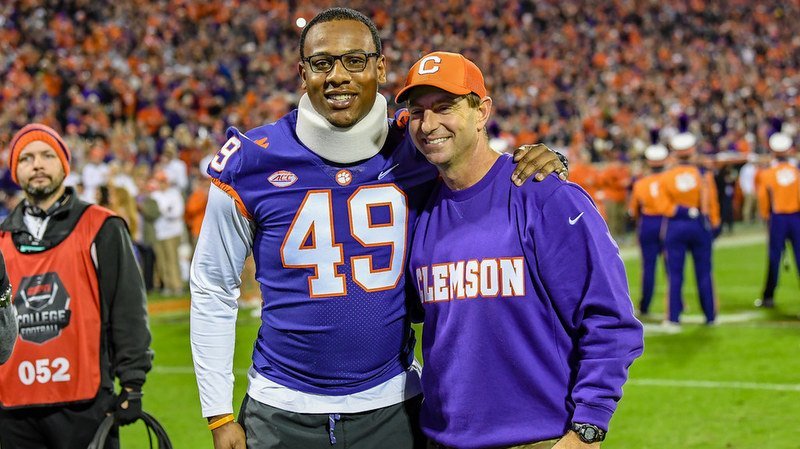 Yeargin has one season to play

CLEMSON – Richard Yeargin thought he would never play football again and retired from the game he loves last August. However, a successful October surgery has given Yeargin a new lease on life and the desire to once again play football. With that in mind, the senior defensive end has entered the NCAA Transfer Portal.

Yeargin missed the 2017 due to a neck injury and after a slow recovery, decided to retire from football before the start of the 2018 season. Yeargin helped out as a student-coach during the season and even suited up a final time for the Tigers’ win over Alabama in the National Championship Game.

Yeargin left the field that night figuring his career was over. He was wrong.

Yeargin had ACDF (Anterior cervical discectomy and fusion (ACDF) is a surgery to remove a herniated or degenerative disc in the neck) last October. It’s the same surgery quarterback Peyton Manning had, and like Manning, Yeargin is thinking about a comeback.

“A lot of what went into my decision was prayer and asking God that if I was to get this surgery that I got in October - the ACDF surgery - that I would probably or maybe not play football again from having it,” Yeargin told TigerNet. “It was very needed though. I received good news after having gone through recover over the last couple months. Really, over the past two years, it's been an on-going process. It looks like I've finally gotten where I feel okay and I'm at peace with things. I've got a lot left in me.”

Yeargin will graduate with a Master’s Degree next week and can transfer to a school of his choosing without having to sit out a year. He has a year to play.

“I graduate with my Master's next week. My major in undergrad was Business Administration and Communication and my Masters is Athletic Development and Organizational Leadership.”

“Based on my conversations with Coach Swinney, he was very supportive in making sure I did what was best for me and making sure I did what was not going to hurt my health long term,” Yeargin said. “After speaking with him, he felt like it would behoove me to give it a shot elsewhere and just go for it. As of now, I haven't played football in a few years. Clemson has been great to me in keeping me on scholarship and staying for my Masters and giving me multiple outlets and resources to take advantage of. Now, Coach Swinney has given me his blessing to play again and to play elsewhere and to give me some recommendations. I definitely appreciate it as I've taken the time with my family to figure out what's best for me.”

Yeargin doesn’t have a new school in mind, he knows he just wants to play.

“At this point, I believe it's all about ball. It's just about aligning myself with the right opportunity and taking advantage of that and just letting the chips fall where they may, understanding that it's a short time that I'm working with so I would hope to have a decision made within the next couple of weeks,” he said. “For me, it's not about playing the dating game. It's about playing the commitment game. Once I find the right opportunity that aligns with what I want to do with my last six months or year of eligibility, so to speak, then I'll definitely be ready to make a decision.”

Yeargin then said he had a final message for Clemson fans.

“It's not a goodbye. It's a see you later,” he said. “I'll always be a Clemson Man through and through - a two-time national champion and a two-time graduate. I will always, always, always wear my Clemson ring with pride.”