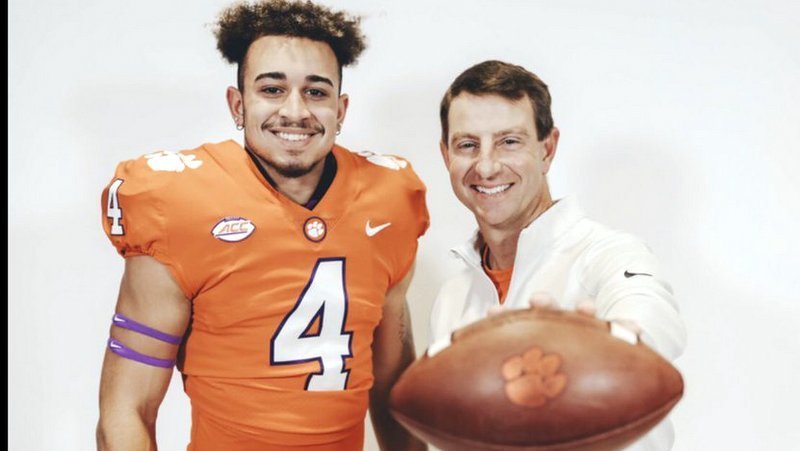 Fleming poses with head coach Dabo Swinney during his visit

Clemson rolled out the red carpet treatment for the nation’s best wide receiver this past weekend, a treatment that included a lot of 1-on-1 time with head coach Dabo Swinney and a game of H-O-R-S-E.

“The visit was great,” Fleming told TigerNet. “The best part was just being around the coaches and playing some basketball or going out to dinner with a couple of the players. Being able to hear things from a player’s perspective was important.”

The prospect had lunch with the Clemson coaches on Friday, watched spring practice and then his mother, little sister and aunt made the trip to Swinney’s house for supper. It was there that Clemson’s head coach challenged Fleming to a game of H-O-R-S-E.

“It was fun, but that man is all fundamentals,” Fleming said. “I got him the first game but he wasn’t content and got me the next two, so I might have to work on my lefty shot and some free throws. He is very competitive, but it was fun because we kinda matched each other.

“I had a great time with him. He really just brings so much energy to everyone around him. My family loved it.”

“I spent the most time with Coach Jeff Scott, but pretty equal between him and Coach Swinney,” he said. “Their message was just all the things that Clemson does different and how they put their players in a place to be successful as a man and a player.”

Clemson is in the running for the nation’s No. 1 quarterback, D.J. Uiagalelei, who has said that Fleming is one of the receivers he would like to play with at the college level and Fleming said that seeing the two of them in the same uniform is a possibility.

“Yes, we talk, and we have some common interests, so if it all goes right you might see us on the same squad,” Fleming said.

Fleming recently released a top six that included Clemson, Ohio State, Georgia, Alabama, Oregon, and Penn State. Where do the Tigers’ stand after the visit?

“Clemson put itself in a very good spot,” he said, “Only the coaches know how good because you can’t put everything out there.”