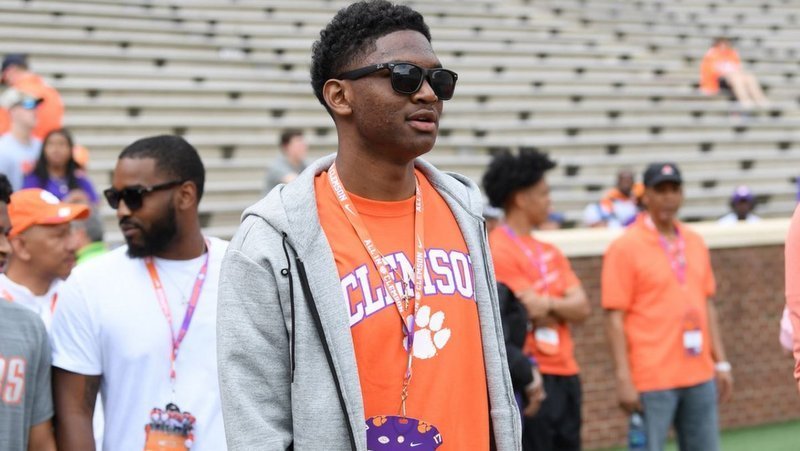 Phommachanh walks the sidelines before the spring game

Clemson’s talented stable of quarterbacks played in front of a national television audience Saturday afternoon in the spring game, and the next big-time Tiger quarterback was there to see the action.

Four-star quarterback Taisun Phommachanh of Avon (CT) Old Farm committed to the Tigers before the spring game Saturday. He is ranked No. 145 nationally by Rivals.com and is listed as the No. 1 dual-threat quarterback by 247. He announced his pledge during a campus visit with his parents and following a meeting with head football coach Dabo Swinney.

Phommachanh told TigerNet it was a family decision, and he knew he wanted to commit before Saturday.

“When I went there the first time, me and my parents really liked it,” he said. “So, after we came home from the first visit, that’s all we could really talk about. The second time we went there, it just felt like we were at home, so we just committed. What sold me was how the environment just feels right and they have a family-oriented culture. That got me because I’m close to my family. It just feels like home."

He then said Clemson is just different, and he is developing a strong relationship with quarterbacks coach Brandon Streeter

“Just the people around there and their culture is different. I definitely like that,” Phommachanh said. “Definitely. Me and him (Streeter) talk all the time. He just wants me to get there, work hard and stay focused.”

The commitment happened in Swinney’s office.

“I knew I was going to commit on the visit. Earlier in the morning, I had a meeting with Coach Swinney in his office, so I told him then,” Phommachanh said. “I was just asking him, ‘I really like Clemson and if you will allow me, I’d like to commit?’ Everybody exploded in the room. It was big.”

He watched Clemson’s spring game with an interested eye and said he doesn’t mind getting on campus and competing against the players that are already there.

He also can’t wait to throw the ball to Clemson’s standout receivers.

“Knowing I’ll have all of that talent, all I have to do is get their ball in their hands and they’ll definitely go make a play,” Phommachanh said.

He gave TigerNet a scouting report.

“Off the field, I’m real. I’m a good kid. I’m quiet and stay out of trouble,” he said. “I just do what I have to do. On the field, they’re getting a quarterback who loves to compete. I’ll go out there and try my best at all times.”

Phommachanh threw for 2,402 yards with a 70.5 completion rate as a junior, tossing 26 touchdowns to only one interception. He added 469 rushing yards and 13 touchdowns on the ground.