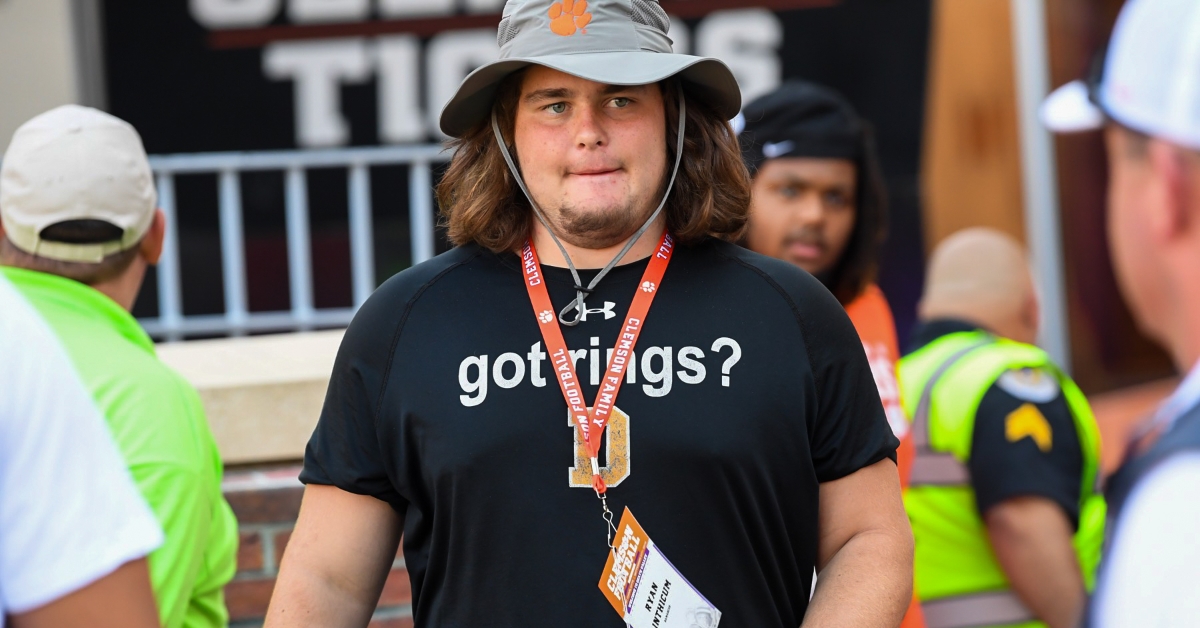 Linthicum walks the Clemson sideline before the win over Charlotte

The nation’s number one center for the 2021 recruiting cycle took in Clemson’s 52-10 demolition of Charlotte Saturday night in Death Valley, and everything from the final score to the Disney movie shot at halftime to the number of players who took the field resonated.

Ryan Linthicum is a 4-star center out of Damascus (MD) who is also the teammate of 5-star Clemson commit Bryan Bresee, one of the nation’s top players for the 2020 class. The duo made their way to Clemson for the game against Charlotte.

“I am very interested in Clemson and they are in my top three, so I wanted to visit and make sure they are a good fit for me,” Linthicum said. “We got to Clemson Saturday morning about ten and got some food and hung out a little bit and went over to the football facility. We talked to Coach (Todd) Bates, talked to Coach (Robbie) Caldwell and then talked to Coach (Dabo) Swinney a little bit before the game. That was awesome. Coach Swinney is just a great guy and it was good to talk to them.”

Disney used the game to shoot scenes for a movie about former Clemson player Ray Ray McElrathbey. Actors ran down the hill and ran some plays with a full movie crew shooting all of the action.

“That was so cool right there,” Linthicum said. “To be able to be in the stands while they shot a movie at halftime was really cool.”

Where do the Tigers stand after the visit?

“Clemson definitely stands really high. Probably leading for me right now,” he said. “I just loved it there and can't wait to get back. I loved talking to all of the commits there. It was just crazy. They are all awesome guys. I was hanging out with Mitchell (Mayes) and he is such a good guy, really down to earth. We can talk about other things than just football. I talked to him and Sergio (Allen) a little bit and it was awesome. It's also awesome that I get to share this with my high school teammate, a guy I could potentially play college football with someday.”

It might not take him long to make a decision – the other two schools in his final three are Michigan and Virginia Tech – and another visit to Clemson is in the works.

Clemson played 111 players – a stat Linthicum knew before I told him.

“That means a lot. It just says so much about all of them, honestly and how they love their players,” he said of the coaches. “And if you work your tail off, you will get some PT (playing time).”

Had an amazing vist to Clemson this Weekend !!! Can’t wait to be back!! #ALLIN pic.twitter.com/054qYFBQlp