It looks like you are using an ad-blocker. You may not have realized, but our team is mostly supported by ad revenue. TigerNet has provided free Clemson sports news for over 25 years. Help us keep doing that by turning off your ad blocker or joining our ad-free membership level. Thank you!
Go Ad-Free! Continue browsing TigerNet with your adblocker active with a monthly or annual Orange Level membership.
Allow sponsors to pay for your browsing Disable your adblocker on TigerNet and ads will fund your browsing.
Already an Orange Level member? Please Login | Need help? Contact support
BREAKING
4-star safety Sherrod Covil commits to dream school Clemson to win championships 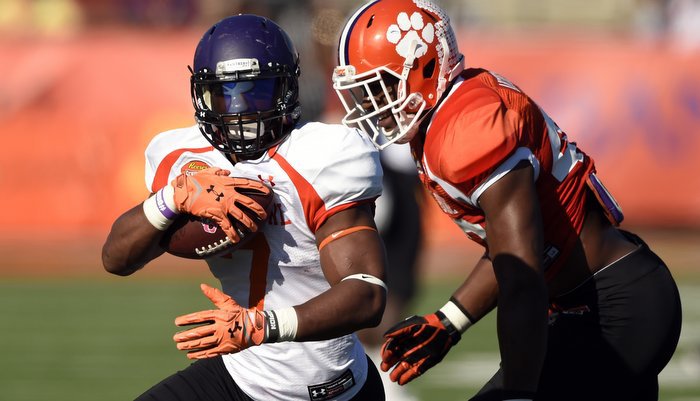 Stephone Anthony
Sr. Linebacker
#42 6-2, 244
Polkton, NC
View Full Profile make plays in the middle of the Clemson defense over the last four seasons, and now NFL executives are getting a chance to see what the North Carolina native can do.

Anthony is participating in the Reese’s Senior Bowl in Mobile, AL, this week and he was listed as one of the bowl game’s “risers” by Tony Pauline of Draftinsider.net. Pauline had this to say of Anthony’s Wednesday performance.

Stephone Anthony/LB/Clemson – Possibly the most underrated linebacker in the upcoming draft, Anthony, 6-2, 245, turned in a complete performance on Tuesday. He did exceptionally well in coverage drills, which he carried over into the scrimmage period. Anthony got depth on pass drops and easily stayed step-for-step with running backs or tight ends who came over the middle of the field. He also showed speed and range in pursuit, quickly getting outside the numbers then cutting off the corners as he ran down ball carriers.

Dan Kadar of Mocking the Draft also listed Anthony as one of Wednesday’s standouts.

That was the case with Clemson’s Stephone Anthony on Wednesday. Anthony consistently looked good in space. That’s known about him. The extra thing he showed was great closing speed. There was one play where a wide receiver caught a short swing pass and Anthony closed with incredible speed. If it were a game, the hit would have been the stuff of .gif legend.

During an interview session following the practice, Anthony admitted that the biggest question concerning his playing ability centered on his coverage skills and that he wanted to show the NFL his entire skill set.

“I don't know the M.O. of what people say about me. But I wanted to be myself this week, and come out and show I could move and I could run,” Anthony said. “I can cover. I am blessed to be here and happy to be here and I am enjoying it. I want them to see me. I want to come out here and be myself and show them I can cover and I can run. There are definitely some great players out here and I have enjoyed going against them all.”

Anthony has had the chance to sit down with most of the league’s teams, and questions have ranged from his playing ability to his relationship with his daughter and her mother.

“It has definitely been interesting. A little different than what I am used to,” Anthony said. “I am definitely enjoying the process and it is fun to sit down with the different teams and talk ball and just watch your dreams come true. I knew the questions were coming. The background check. I knew they would do it all. At Clemson we are told how to handle ourselves in the interviewing process. I was just prepared for the situation and had some heads up on things. I was fortunate that I just had people wanting to talk to me. All of the teams have shown some interest. I am just happy that they have shown some interest.”

Asked what he brings to the table, Anthony replied that he learned how to be a leader while at Clemson.

“My leadership qualities are one thing I bring to the table. Being able to run,” he said. “Being able to play in coverage and tackle in place. As a leader, I want to affect everybody - my teammates and the guys that are on the field with me. I kind of want to be that high-energy guy and affect my guys in a positive way.”