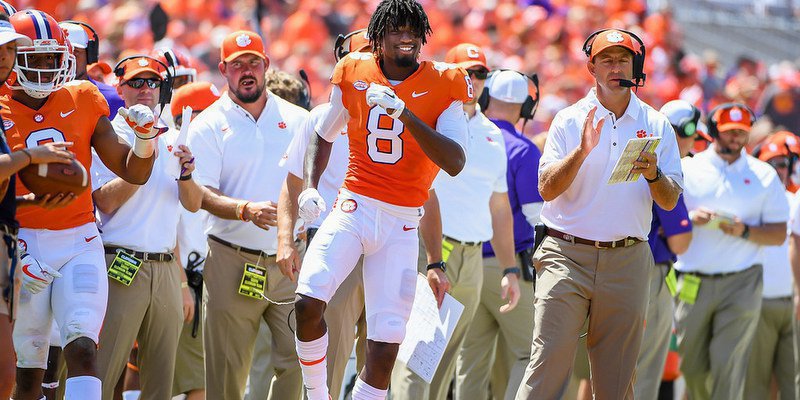 The 2018 NFL Scouting Combine begins this week, and five former Clemson players are a part of the proceedings. This year's event, taking place in Indianapolis, will begin on Feb. 27th, and will conclude on March 5th.

NFL.com wrote an analysis on each player and here is what they had to say about Deon Cain

Cain's career at Clemson has had its highs and lows. He played in 13 games, with one start, as a true freshman in 2015, leading the team with 17.1 yards per catch (34 receptions, 582 yards, five TD). However, he missed the team's two playoff games that year due to a suspension for failing drug tests. Cain missed spring practices due to the suspension, as well. He bounced back as a sophomore, however, improving his reliability as a receiver and teammate. In 15 games as a reserve, Cain averaged 19.1 yards on his 38 receptions (724 yards in total) and scored nine times using his speed, vertical, and learning from teammate Mike Williams on how to create separation at the top of his route. He caught five passes for 94 yards in Clemson's title game victory over Alabama. Cain garnered third-team All-ACC honors as a junior, leading the Tigers with 659 receiving yards and six touchdowns on 52 receptions for the ACC champions. Cain was a USA Today High School All-American and first-team All-State pick as a dual-purpose quarterback but was rated among the top five receiver recruits in the country coming out of Florida.

STRENGTHS: Size is a plus. Movement is fluid and feel for the position comes naturally. Gets into routes with vertical push and forward lean. Uses quick slaps to grease his way past press coverage. Glides in his routes and maintains excellent pace throughout. Legit deep target with jet gear to get vertical once he clears defender's edge. Willing hand fighter downfield. Physical when ball is in the air. Had focus drops but won't gator arm it in traffic. Understands optimal catch angles and adjusts accordingly. Quick pluck-and-tuck mechanism as a pass-catcher. Tap dancer near the boundary. Keeps dig routes from drifting and allowing safeties into the catch-point. Talented after the catch. Has shake to elude and allows tacklers a taste of aggressive stiff-arm. Adequate competitiveness as a blocker.

WEAKNESSES: Failed to post expected production jump after taking over WR1 duties from Mike Williams. Targeted more but production declined in almost every meaningful category. Will need to expand his route tree as a pro. Doesn't separate as much as he could underneath. Can run routes with more urgency and suddenness. Fluctuations with focus has plagued him. Has seen drop rate increase in each of the last two seasons. Needs to play stronger through his routes. Appeared to get flustered at times by length and size across from him. Penalized 10 times over three years with a majority being false starts.

BOTTOM LINE: Cain is a classic Clemson receiver with a good combination of size and speed and an underappreciated feel for the position. Cain's routes are smooth, but also show an understanding of coverage. Cain has the pure speed to attack over the top, but he should be a competitive option on all three levels. His drops are more a function of concentration than ability, but it needs to be improved. Cain has the chance to become a very good NFL starter but is better suited to handle the WR2 rather than a role as the alpha target.