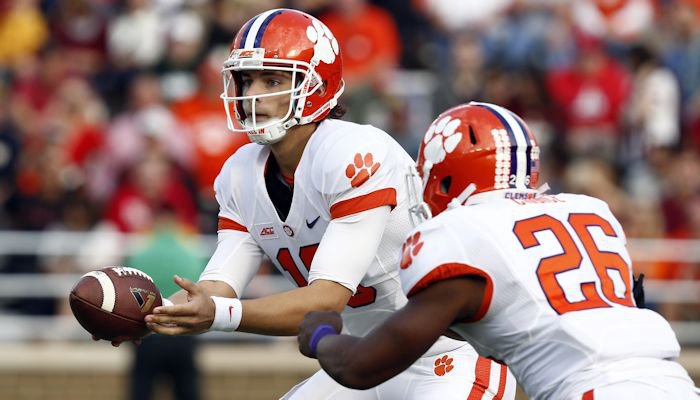 CHESTNUT HILL, MA – Lately nothing comes easy to the Clemson offense and that was never more evident than Saturday night.

Chad Morris
Offensive Coordinator / QBs
View Full Profile ’ group had to fight, scratch and claw for every yard and every point. Despite the injuries and inadequacies, the Tigers found a way to rip a victory out of the jaws of defeat, beating Boston College 17-13 in Alumni Stadium.

"It's not easy right now," Morris told the media after the game. "Nothing is easy right now. We're having to earn everything we get. And that's okay. That's adversity and we have to battle and that we’re going to have to continue to battle.”

Late in game the rain fell and Alumni Stadium came alive for the first time all game as the Eagles clung to a three-point lead and Clemson faced a third-and-10 with the game on the line. Quarterback Cole Stoudt

Stoudt completed another pass to Williams before C.J. Davidson

Morris said no one needed that drive more than Stoudt, who will need the confidence to lead the offense in freshman Deshaun Watson

“Without watching the film, I thought we missed some things early. We missed some things in the run game but he sat in the pocket and hit Mike Williams on some plays,” Morris said Saturday. “I thought we missed some deep ball shots. We had some guys behind them that we left a little short but that'll come with time, hopefully with more practice. He needed a drive, a play to win the game. He needed that for him and for this football team and for his leadership. That was a must-win situation for him and to be able to bring us back from being behind was critical for him."

Morris said that Stoudt finally found his rhythm in the fourth quarter and was able to take advantage of Boston College’s defensive scheme to set up Davidson’s heroics.

"We felt like we were playing with really good tempo,” he said. “We knew they were playing man coverage on Mike. We actually missed Mike – the play before when we threw to [Stanton] Seckinger, we should’ve gone to Mike. We came back to it because they were in press man on us and we knew we had a chance on the third-down call to get Mike over the top. That should have happened a play earlier.

“Then they started disguising their coverages and playing press-bail on him and we were able hit on him underneath and step out of bounds. We played with some tempo. We had them on the ropes a little bit. They were having a hard time getting lined up. I kept telling our guys, though, 'We're going to have to create some type of run game on this drive to have some success.' We were able to do that."

Without Watson, Clemson’s offense has struggled to score points – scoring only 26 points over the last two games – and Saturday wasn’t any easier when Morris’ unit lost several key playmakers early in the contest.

Adam Choice
Fr. Running Back
#26 5-10, 211
Thomasville, GA
View Full Profile , which takes a little bit of our offense away, some plans that we had tonight. We lose him early,” Morris said. “We lose Jordan Leggett

Adam Humphries
Sr. Wide Receiver
#13 5-11, 193
Spartanburg, SC
View Full Profile for the entire second half. We were hamstrung a little bit but we knew that coming in. But again, when we had to have something, we made a play. We were much, much, much better on third down tonight."

However, the offense continued to battle and finally found a way to capitalize with a touchdown.

"I think that's two weeks in a row when we really had to have a big time drive, we found a way to make it happen,” he said. “We were able to capitalize and get a touchdown out of it. I'm extremely proud of them with how they fight and with the way they scratch, claw just to make it happen."