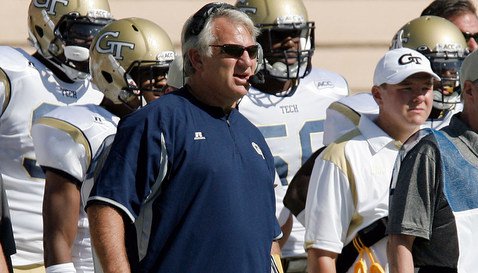 CLEMSON – Georgia Tech’s defense is ranked 12th nationally in total defense [329.6 yards] and 14th in scoring defense [18.8 points] under new defensive coordinator Ted Roof, who got a close look at Clemson’s offense while watching Clemson practice for the Chick-fil-A Bowl last December in the Georgia Dome.

“Number one, they are one of the top defenses we have seen this year,” Morris said. “They are very impressive, and they are playing extremely hard. They have some playmakers, the safeties can make tackles in space. We have our work cut out for us – they are very talented up front, their guys are disruptive and good pass rushers off the edge. These guys don’t see a lot of snaps (564 plays), but they play hard. We have had a week to prepare, and we just have to come out and execute and do what we do.”

Morris said that Jeremiah Attaochu is one player the offensive line will have to pay attention to.

“We have played guys similar to him. He is very quick and has great upfield moves,” Morris said. Ninety three (Emmanuel Dieke) and 99 (Euclid Cummings) are great players up front. Those guys really stand out. No. 14 (Jemes Thomas) plays safety, corner and nickel SAM. He is all over the field. These guys are doing a good job of putting them in a position to make plays, and they make plays in space. They are one of the top defenses we have seen this year and one of the top defenses in the country. But this is about us executing and doing what we do and getting better and building off of what we have done in the last two games and building off the consistency we have seen in the last two weeks.”

Health at running back

“Zac (Brooks) has been out there this week, but C.J. Davidson

“There were some good things with all the guys. I was very pleased with some of the young guys and how they executed and there are some guys that are going to get more playing time. They came in and did what they were supposed to do. We have had some good competition in practice the last couple of weeks. Would love to have Isaiah Battle

Isaiah Battle
So. Offensive Tackle
#79 6-6, 280
Brooklyn, NY
View Full Profile play more, and he has had good 10 days of practice and hopefully he can build off that and we will see Thursday night.”

Getting back in action after off week

“I think more than anything our guys are ready to get back into action and get back on the field and get November rolling. We are excited to see these guys play. We got some guys healthy and ready to roll for the final three games. There is some added excitement right now with just two home games left and Thursday being a primetime game. It is a mental grind right now. Only the strong survive the month of November and that is what this month is about. Our guys are ready to go Thursday and we are excited to see these guys back in action.”