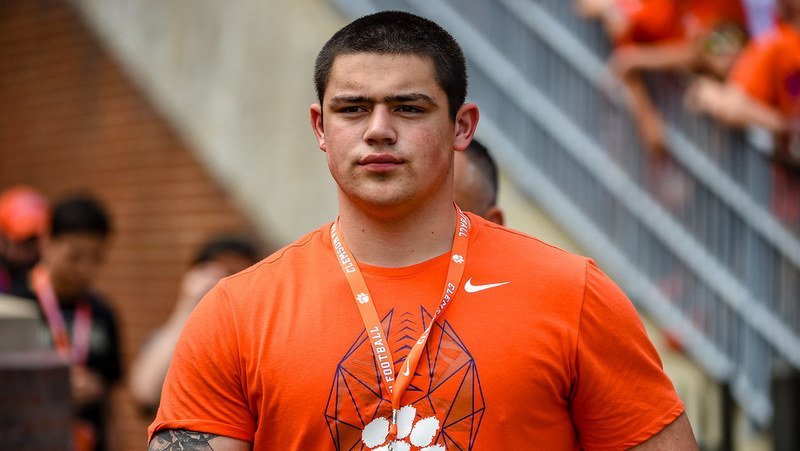 Bresee committed to Clemson at the Tigers' spring game

Why go to Oklahoma if you don’t have to?

Clemson landed the nation’s No. 1 recruit Tuesday when Damascus (MD) defensive line prospect Bryan Bresee committed to the Tigers. Bresee told TigerNet he committed during Clemson’s spring game even though that wasn’t the plan heading into the visit.

Bresee said he began to know that Clemson was the place for him after a Junior Day visit in March.

“I would say after I went to their Junior Day visit,” Bresee said. “I wanted to go visit a couple of schools after that visit just to make sure that Clemson was where I wanted to go. But then after the spring game, that is when I really knew.”

Bresee also visited for the South Carolina game in November, allowing Clemson to leap forward in his recruitment.

“Meeting with Coach (Dabo) Swinney before the game was awesome,” Bresee said. “I had the chance to get in front of him and talk to him, and it was nice to do that. And then I spent a bunch of time with Coach (Todd) Bates. We have become really close since then, but that was really the first time I had the chance to hang out with him, and it was a special time for me.

“Coach Bates is such a genuine guy who really loves all of his players. I get that feeling from him. I feel like all of his players love playing for him. From everything I have seen he is the kind of coach I want to play for.”

The Junior Day visit followed and then the visit for the spring game. Bresee had plans for other visits – including the next week at Oklahoma – but decided in his hotel room in Clemson.

“I wasn't planning on committing then. I was planning on going back during the summer and committing during the summer,” Bresee said. “But I was sitting on the bed in the hotel room with my dad after the spring game, and I had a visit to Oklahoma planned for the next weekend. And my dad, he knew. He said, 'Do you really want to be here?' And I said yes. He then asked if there was any other place I wanted to see and I said no. So he said, 'Do you really want to sit on a plane for five hours and see Oklahoma?'

“And I was like, dad, you're right. At that point, I was like, let's just do it tomorrow. So I FaceTimed my mom, and she was the first person I told. And then one of my high school teammates is Ryan Linthicum, and he is also getting recruited by Clemson, and he was there. So I went down to his hotel room and let him know, and then I texted Coach Bates.”

Bresee and his dad told Swinney in Swinney’s office.

“I told Coach Swinney, and he jumped up, and he hugged my dad and me, and I told him that Clemson was the place I wanted to be and he welcomed me with open arms,” Bresee said.

Bresee – who says the Tigers see him playing both defensive end and defensive tackle – will enroll early and participate in spring practice in 2020. In the meantime, he will focus on making sure Clemson has the nation’s top class.

“We will definitely have the number one class,” he said. “He (Swinney) was talking about that before. He said you guys are going to ruin my speech about never having a number one class. That is our class' job now, is to take that number one spot.”

He also says the Tigers aren’t going away and will be a player on the national stage for the foreseeable future.

“You look at who we are bringing in and who we already have and the people that are on the team already who are doing such a great job,” Bresee said. “We have a lot of young players that did a great job last year and stepped up and did a really good job. I don't think Clemson is going anywhere.”