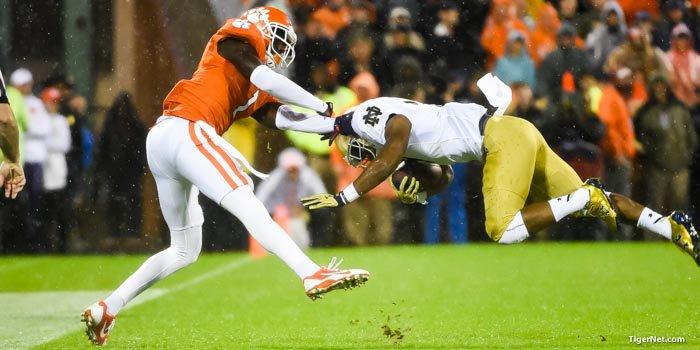 Kearse played well against the Irish, including saving a touchdown with this tackle.

CLEMSON – Clemson’s players and coaches have already turned the page from Notre Dame to Georgia Tech, and while safety Jayron Kearse

Jayron Kearse
Jr. Safety
#1 6-4, 224
Fort Myers, FL
View Full Profile didn’t have the “chippy” attitude he showed last week he was still in the mood to tell anyone who would listen that he is part of a good team.

Kearse made sure that Notre Dame knew the Clemson defense would be ready to play, and he told the media Monday in the WestZone that he didn’t hear a lot of talking from the Irish once the game started.

“From my sideline it was (chippy). I don't know about theirs,” Kearse said. “It wasn't too chippy from them. I don't know if the scoreboard got to them or if they were just scared, but there wasn't too much coming from their players.”

Kearse said he wasn’t scared about talking a little trash.

“When I said it, I ultimately knew we would get the last word because of the way we prepared throughout the week,” he said. “We had an extra week to prepare and it just paid off for us. When I talked trash I knew my guys would back me up and that we would back it up.”

However, the Tigers are fully focused on Georgia Tech and Kearse said he is ready for more doubters to pop up this week.

“Coming into this week, we are preparing like it's a new season,” he said. “We are coming into this week to put in a game plan to beat Georgia Tech and that is all it is. There is no extra motivation because they beat us last year. This is the biggest game of the season for us and that is all it is. That's just the way we have to go through things (doubters). People will always have their opinion. People will think we don't have a good team so we have to go out there and prove it.”

He ended by saying he wouldn’t have talked if he didn’t feel disrespected by the Irish players.

“Honestly, I wouldn't have said anything about Notre Dame if they wouldn't have been talking on Twitter,” he said. “I just felt like they were talking and that was a sign of disrespect to me and I don't like being disrespected. I said what I had to say and did what I had to do. We just know Georgia Tech is a good team and we have to come in and have a good week of practice to pull this victory off. I have respect for them. They have a great team and they have a great coach and we will do what we have to do to go out there and pull off the W”

“The crowd was ridiculous last Saturday. They did their job and we did our job. There was 82,000 in the rain getting soaked. I can’t say enough about our fans. I love our fans. They (Notre Dame) had delay of game penalties and that was due to our crowd. I hope they keep it up.”

“He is getting it together. It's better than it was last year. We have guys like G-Hop (Germone Hopper) who are trying to mentor him. His rhythm is a little off.”

On trash talking against Notre Dame

“I think most offensive and defensive linemen don't do a lot of talking. We let our work do the talking. Except for Shaq Lawson

Shaq Lawson
Jr. Defensive End
#90 6-3, 272
Central, SC
View Full Profile . He never stops talking. You just have to be around him to know he talks all the time. I love Shaq Lawson to death, but he is a guy who loves to talk an he loves to talk very loud. It's all in fun, and he is out there having a good time. He's good and he knows that he's good. He's not cocky, he's just confident in his abilities.”

The condition of the field

“We thought the field was going to be flooded and muddy, but our grounds crew did a fantastic job of keeping the field in check all week.”

“Georgia Tech is a good team and they have a good defense. Like Coach (Tony) Elliott was saying this morning, this is a rivalry game. This is a team that isn't in our division that we play every year. So this will be an emotional game as well. But we do a good job here of staying focused and taking it one game at a time and not having the hangover you hear about a lot.”

On his tumble after the failed two-point conversion

“I didn’t do that on purpose. I actually tripped. I think I might have tripped over Jayron. I didn’t mean to do that.”