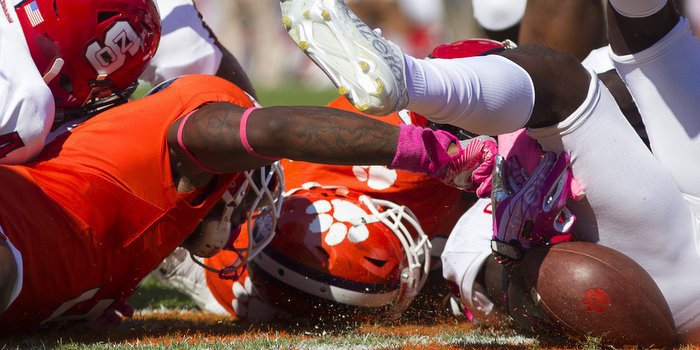 Clemson beat Louisville two weeks ago in thrilling and dramatic fashion, sealing the victory on a tackle by Marcus Edmond and I wrote a thoughts piece that followed the line of, “I can’t believe what I just saw.”

Clemson beat North Carolina St. Saturday, another dramatic, last-second, heart pounding win. And my Sunday thoughts are, “What the heck did I just see?”

The win over the Pack was huge – Clemson retains control of the ACC Atlantic and all of the postseason goals are still on the table. I am not one that really believes in “luck” when it comes to winning or losing football games, because the reality is that you make your own luck, and teams that know how to win keep winning despite the obstacles. However, you can say the Tigers were fortunate to win. And that is probably a bit of an understatement.

I also don’t subscribe to the excuse of “overlooking an opponent.” Once you’re involved in a dogfight in which your opponent is repeatedly punching you in the mouth, all thoughts of a bye week or looking ahead to Florida St. disappear. We also heard that Wednesday’s practice was one of the best of the season.

So, what happened? Why does Clemson continue to struggle at times?

I think it’s actually pretty simple, and I’ll get to it later on.

Let’s start with the complaint that Clemson runs the ball up the middle on first down too much. I went back and watched the game, and here is what I found: Clemson ran 40 first down plays during Saturday’s game and 18 of them were running plays. Eleven of those 18 were runs up the middle; however, at least 10 of the runs that went between the tackles were read options, in which Deshaun Watson appeared to make the right read.

State did what a lot of other teams are doing against the Tigers – they are loading the box or bringing up a safety, the objective being to take away the running game and Watson’s read-option running ability. Watson is making the right reads – he had unblocked defenders waiting for him all day Saturday - but the backs are finding trouble getting to the second level of the defense.

Is that on the backs or the offensive line? Well, it’s hard to take five players and block seven, but I do think Clemson could simplify things by going with more of an inside blocking scheme rather than an outside blocking scheme. Or, my preference, just man block. I was told postgame that the offensive linemen were begging for basic plays, but also asking for an inside zone scheme. The inside zone didn’t happen. I also thought the backs that were in there ran well, especially C.J. Fuller. There just wasn’t a lot of room to run.

When you look at Clemson’s offensive stats, they are actually really good, despite what people think about the playcalling or the offensive line. Clemson ran 91 plays for over 500 yards Saturday. That should be good enough to score more than 17 points in regulation.

Teams are doing what they’ve done since the Auburn game – taking away Watson’s ability in the run game and the run game in particular and making the Tigers and Watson either hit the long downfield throw or have eight, nine, ten or eleven play drives to score. On those drives, the Tigers have to be mistake-free when it comes to ball security, and they haven’t been. Four turnovers Saturday. Three were inside the State 25, including two inside the 10. The one on Clemson’s side of the field? Returned for a touchdown. There was also the failed fourth down conversion on the goal line, and I do think the blocking could have been a lot better on that play. Watson hit the one with three unblocked defenders waiting on him.

Simply put, however, the Tigers have to stop turning the ball over. They did it last season and still made the championship game, but they weren’t the target then that they are now. State had a great game plan, and they were more physical at the point of attack than Clemson on both lines of scrimmage (it’s been a long time since I’ve thought that about a Clemson team). Despite all of those factors – and this includes Lamar Jackson’s great play in the second half in the Louisville game – there were points left on the field and Clemson still won.

Take away the turnovers – or even half of the nine they’ve suffered in the last two home games – and the scores look different.

This team isn’t playing at a championship level. Not yet. The good news is they have five more regular season games to get things right, but it will be on the offense to protect the football. If they don’t, there will be a loss at Florida St. or in the ACC Championship Game or a playoff game. They won’t always be as fortunate, because the good fortune will run out.

But stop the turnovers and everything will look a little brighter. It starts two weeks from now in Tallahassee, and it might give us a good indication of what the rest of the season has in store.