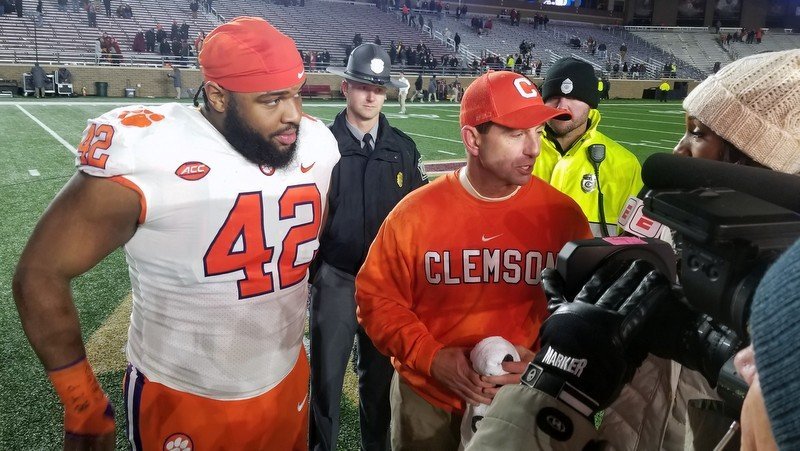 Every college football season is filled with big games and big moments, of memories that will stay with you forever.

Most of the 2018 season, however, has lacked drama. The road game at Texas A&M had that familiar punch, but all of the games since then have lacked the usual buzz. I was hopeful that Saturday night at Boston College would be different.

I wrote Saturday that many Boston College fans were very vocal as we walked the city Friday and Saturday, and there was plenty of good-natured smack talk to go around. My favorite pregame moment occurred Saturday in the North End – I was in line at one of the pastry shops when a group of orange-clad Clemson fans walked down the street. Somewhere above me a voice called down and said, “Hey Clemson! Boston College is gonna win by three touchdowns!! I don’t even know what state Clemson is in!”

The Clemson fans laughed and continued on their merry way, and at that moment I was ready for kickoff.

We arrived at the stadium in time for the Tigers to arrive, and while I shot video of the coaches’ bus arriving, Nikki grabbed a video of the first players’ bus. She came over and said the arrival of freshman quarterback Trevor Lawrence was like the arrival of a boy band – plenty of screams and squeals from some of the gathered females. A few Boston College fans threw in some remarks of their own, but it was still relatively calm.

As the team went through pregame warm-ups there were the usual jeers, including one Boston College student who implored each player that came out of the Clemson tunnel to, “run back and get some gloves. I know you boys aren’t used to the cold.”

One of the perks of the job is the ability to hang around the sideline during pregame – when it’s a big game you get that familiar buzz, an almost tangible energy that makes everything electric. An hour before kickoff, the Clemson fans were in their seats and the band was playing and you could tell the orange-clad faithful were ready for kickoff.

The rest of the stadium, however, was empty. The usual buzz? Lacking. As I wandered the sidelines the Clemson band began to play and Tiger fans clapped along to Tiger Rag and then broke out into cadence count. One person – sporting a Boston College sweatshirt – turned around and drank in the spectacle. His eyes widened, and he turned to one of his friends and said, “Welcome to big-time college football, Boston College.”

Sadly, the big-game juice never appeared during pregame and it never really appeared during the game. The Clemson defense was on a mission and whether starting quarterback Anthony Brown was in the game or not, the Eagles simply weren’t going to be competitive.

Which brings me to Christian Wilkins.

If you’ve ever watched Wilkins during pregame, he finds a corner of the endzone and catches a number of passes, preparing for the game like he is a wide receiver. Then he wanders over to the goal post and treats it like he would an offensive lineman – he punches it and spins and practices his moves.

The last few weeks, there has been an urgency to everything he does. He realizes that time is growing short on his Clemson career, and he’s determined to make every minute count. Wilkins sat down beside head coach Dabo Swinney and Swinney’s eyes moistened as he talked about his senior leaders.

“This group has kind of made history all year. Seems like every week they're doing something that either hasn't ever been done or hasn't been done in a long, long time,” Swinney said. “It is a real credit to this senior group and this junior group. This is a very focused football team that they believe in their vision. They believe in what they want to go achieve, and they're willing to put the work in, and it's just a joy to be around them every day.”

Swinney spoke further on Wilkins during his Sunday teleconference and said, “I want to do everything I can to help this senior group have a great finish.”

Wilkins and company simply have a refuse to lose mentality. I’ve had more than one person tell me that this group has been focused on one goal since last January when they decided to return – they didn’t come back to finish in second place. When you watch Wilkins warm up before a game, you see that desire, you see the intensity and you see the focus.

As he worked on the goal post a well-meaning fan kept calling Wilkins’ name, hoping to get a glance or some recognition from the big defensive tackle. Wilkins was in the zone, however, and continued to push and to work. It hit me later that what we are seeing is something special, and while Saturday may have lacked that big-game buzz, the big games are coming.

Christian Wilkins will be ready for them.