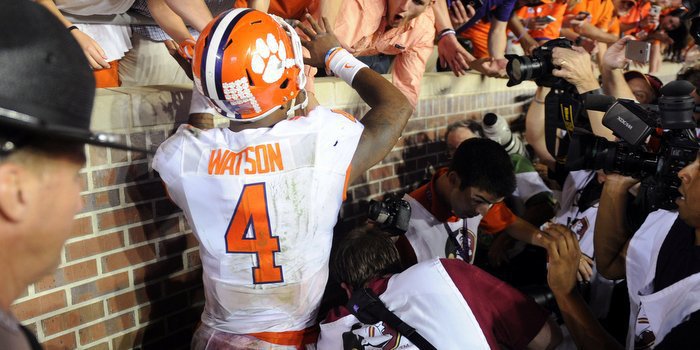 The media stood outside of the Clemson locker room early Sunday morning, wrapping up the final interviews while the football team dressed, grabbed sandwich boxes and loaded the buses for the trip to the airport and home.

One Clemson staffer, still drenched in sweat and looking as tired as I felt, turned to me and said what everybody else was thinking. “We’ve been looking down the barrel of a loaded gun all season, and somehow we’ve survived,” he said. “I’ve never seen anything like it.”

That’s the understatement of the year.

Heading into the weekend, I was shocked at the number of people who were predicting a double-digit win. I predicted a four-point win because I’ve been dealing with recruiting for a while now, and I knew the Seminoles still had plenty of “dudes” who can flat out play, and that was evident watching in person.

Yes, Florida St. was dealing with injuries and hadn’t played their best this season, but we were told on the sidelines before the game that the Seminoles were coming off a great two weeks of practice and were treating this game as the most important game in their season.

You have a team as talented as just about any team in the country, treating the game like it was their Super Bowl, with two weeks of preparation, playing at home in front of a frenzied crowd. Clemson still won, and despite the two interceptions and some of the mistakes that continue to plague the program, this was a big win. Huge. Winning in that kind of environment was tough, and somehow the Tigers found a way to prevail.

There were so many big plays and big moments in the game that it’s hard to list them all. I’ll still take a swing at it.

*Greg Huegel hit three big field goals, none bigger than the 46-yarder that put Clemson up 29-28 in the fourth quarter. When he lined up for the kick, someone in the press box remarked that they didn’t like the angle, with Huegel kicking from the right hash. He nailed it, and it’s one of the plays that gets overlooked because of the late touchdown and defensive stand.

*The field goal was set up by a 3rd-and-20 throw from Deshaun Watson to Hunter Renfrow. Renfrow made a sliding catch, and the ball arrived just a split second before the defender. Another inch either way and the outcome might have been different.

*How much fun is it watching Dexter Lawrence and Christian Wilkins dominate on the defensive line? Add in stalwarts like Carlos Watkins, Clelin Ferrell, Scott Pagano, Austin Bryant, Richard Yeargin, Albert Huggins and others and this line is either the nation’s best or right there in the top three.

Wilkins and Lawrence pushed the Florida St. offensive line around for most of the evening, and even though there were mistakes (gotta set the edge against Dalvin Cook) there were more bright moments than we can count. Now, let me give you some hope for next season – they’re all back except for Watkins. Scary.

*The word for the week (for the Clemson team) was “poise.” Watson and the entire Clemson offense showed that poise, especially in scoring 17 fourth quarter points. With Cook putting on a Heisman-worthy show and Watson and the offense dealing with the two critical interceptions, I wondered how the Tigers would respond. They responded with a lot of heart. And poise.

*Watson got a little irritated with one media member during his postgame interview. The media member in question kept asking about the mistakes made by Watson and the offense, and Watson snapped back that the team doesn’t dwell on the mistakes, instead focusing on the success they’ve had. He then said that the national media and some members of the local media don’t like to see Clemson succeed and will be overly critical despite an 8-0 start.

*I remarked a few weeks ago about the run the Tigers are on, and how there are some special streaks going on right now. With the win last night, the Clemson program is 32-4 since Watson stepped on campus. Think about that – they’ve won 32 out of 36 games over the last three seasons.

Taking it a step further, the Tigers have won 25 out of the last 26 games, the only loss coming in the National Championship to Alabama.

Clemson’s win was its 25th straight win in a non-National Championship game.

Clemson’s win was its seventh over a top-25 team in its last eight opportunities.

Saturday marked just the second time Clemson has beaten Florida State in Tallahassee since 1989, the first since 2006.

Clemson is now 8-0 for just the sixth time in school history, the second year in a row.

This is the 10th different ACC road stadium Clemson has won in the last four years. This senior class is now 13-2 in ACC road games (only losses at FSU and Georgia Tech in 2014).

Clemson now has 64 wins in the last six years, second only to Alabama (70) nationally.