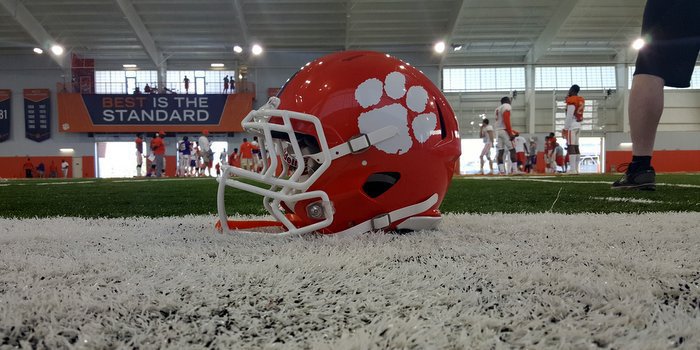 Pace's Andrew Thomas was on hand for Monday's practice

CLEMSON – Monday was one of the prettiest days of the spring with temperatures hovering around 80 degrees, and the Clemson football team took advantage of the sunny skies to practice a little football.

The media was allowed to watch the first part of the practice, and we have plenty of news and notes and observations.

Let’s start with the visitors:

A pair of 4-star offensive line teammates – Atlanta (GA) Pace Academy linemen Andrew Thomas and Jamaree Salyer – took in Monday afternoon’s practice. Thomas, a 2017 prospect has been to Clemson’s campus several times, including for Clemson’s first junior day back in February, and has held Clemson among his favorites since the beginning.

Salyer, is a 2018 prospect, but already holds over 10 offers and will pick up more as he continues the camp circuit. During Nike’s The Opening Regional in Atlanta, he went against some of the best defensive players in the southeast and more than held his own.

A large contingent of coaches from Brownsburg, Ind., was on hand. Brownsburg is the home of Clemson 2017 quarterback commit Hunter Johnson, and one of the coaches said that Brownsburg is going to run an offense a little more similar to what Clemson runs next season. The coach said, “We have to get better, just like these guys, and this is one way to do it.”

I had to ask about Johnson, of course, and one of the coaches said if Johnson walked on campus today he would be the second-best quarterback on the field “behind No. 4.” 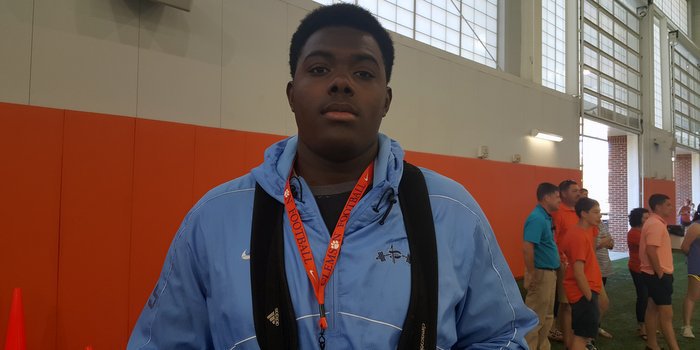 Pace's Andrew Thomas was on hand for Monday's practice"

Former Clemson running back C.J. Spiller was at practice, and he spent a good bit of time watching the kickoff return portion. I asked him if he knew anything about kickoff returns, and he smiled and held his forefinger and thumb about an inch apart and said, “Maybe just a little bit.”

All of the members of Tony Elliott’s running backs group are looking good this spring – it’s probably his deepest group to date – but Dye looks like he’s taken it to another level. We learned late last week that Dye had another Achilles scare early in camp but came back from the scare with a vengeance. In the words of one observer – a former player – Dye “looks ridiculous.” That’s a good thing in this context.

Dye had a burst I haven’t seen from him since he’s been at Clemson, and he was attacking each and every drill like it was his last chance. This group is going to be fun to watch, especially with Dye and C.J. Fuller and Adam Choice pushing Wayne Gallman.

Wide receiver Mike Williams and offensive lineman Sean Pollard were in green, meaning they can go through all of the drills except live contact. Offensive lineman Zach Giella and Korrin Wiggins were in yellow.

I watched the entire special teams period during Monday’s practice just to get a feel for how the coaching staff was handling things this spring. One noticeable difference was that the return men worked on one field, while the coverage units worked on another field before coming together for the final part of the period.

Danny Pearman and Jeff Scott worked with the return men, that comprised of three duos – Wayne Gallman and Mark Fields, C.J. Fuller and Ray-Ray McCloud, and Artavis Scott and Adam Choice. Fields and McCloud look the most natural in the return game and both show the natural burst and ability to find the hole.

An interesting note was that Tony Elliott put the quarterbacks through the same ball security drills as the running backs. The only quarterback to put one on the ground was Bryant, who immediately did pushups.

One note on the early enrollees – Linebackers Shaq Smith and Tre Lamar are easy to spot. They both stand above the other linebackers and look like they’ve been in a college strength training program for several years.