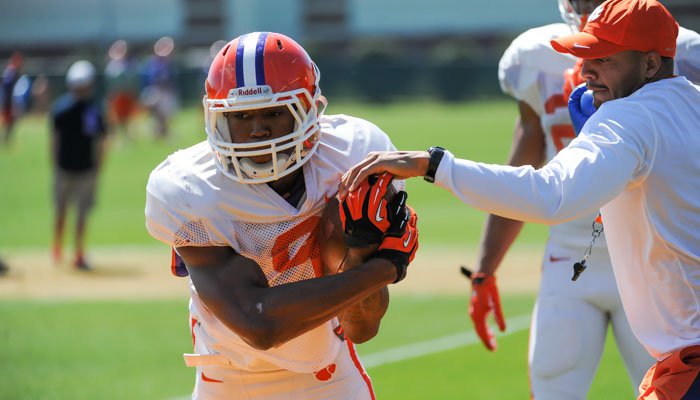 CLEMSON – The Clemson football team practiced under sunny and warm skies Monday afternoon, and the media was allowed to take in the first six periods.

I spent a good portion of the practice watching the quarterbacks, and for what it’s worth it looked like if there was indeed a hierarchy at this point freshman Tucker Israel

Nick Schuessler
RS Jr. Quarterback
#12 6-3, 195
Grayson, GA
View Full Profile was the better quarterback of the three – he was on the money with his throws, wasn’t late on any pass and showed a good grasp of the offense. In other words, what you would expect from a veteran.

If the coaches decide that one of the two freshmen will play this season – stagger their eligibility – it will be a hard decision in September.

Of course, we can’t talk about quarterbacks without talking about Deshaun Watson

Deshaun Watson
So. Quarterback
#4 6-2, 205
Gainesville, GA
View Full Profile , who was running without any limp or hesitancy. He looks bigger in his upper body every time I see him, and if he continues to gain weigh the right way he could very well be 215 by the start of the season.

During one of the passing sessions, wide receiver Mike Williams

Mike Williams
Jr. Wide Receiver
#7 6-4, 210
Vance, SC
View Full Profile earned a small rebuke from Swinney. Williams tried to one-hand the ball and dropped it and Swinney barked, “You have two hands. Use them!” And Jeff Scott

Jeff Scott
Co-Offensive Coordinator / WR
View Full Profile followed with, “You complain about touches and I just tried to get you two.”

Scott also complained the receivers weren’t running complete routes in the scrimmage and Scott pointed out that was why the receiver “almost got your teeth knocked out by the safety.”

*Former Clemson quarterback Tajh Boyd was also an interested observer, and he spent a good portion of the practice with head coach Dabo Swinney

C.J. Spiller
Pro Running Back
#28 5-11, 195
Lake Butler, FL
View Full Profile was also on hand, and he of course cast a critical eye at the running backs as they went through drills. For the record, Spiller really likes what he sees out of Wayne Gallman

Gallman simply looks the best of any of the backs right now. He has the burst and the confidence you want in your top guy, and he doesn’t take plays off in practice. At least not when we’ve been there. Of course, he was practicing in front of his former head coach so that might have had a little something to do with the extra spring in his step.

*Former offensive lineman Kalon Davis was in attendance. Davis had surgery before Clemson’s pro day to alleviate a back injury and told us that he had his staple removed this morning. He isn’t able to do any rehab until he’s completely cleared by doctors but did say that he’s still hearing from several NFL teams.

*Loganville (GA) Grayson head coach Mickey Conn was at practice with what looked like another Grayson coach. Conn and Clemson head coach Dabo Swinney were roommates at Alabama.

Stanton Seckinger
Gr. Tight End
#81 6-5, 240
Isle of Palms, SC
View Full Profile , who suffered a knee injury in Clemson’s win over South Carolina, was running during practice. He wore a bulky brace on his left leg, but appeared to be running without a limp.

Adam Choice
So. Running Back
#26 5-9, 215
Thomasville, GA
View Full Profile both suffered a torn ACL last season, but both were moving around and running during practice.

On the offensive line, Mitch Hyatt

*A lot has been made of junior tight end Jordan Leggett

Jordan Leggett
Jr. Tight End
#16 6-5, 250
Navarre, FL
View Full Profile ’s inconsistencies through his first two years at Clemson, but hopefully Durrell Berry can have an impact. Berry is constantly in Leggett’s ear on the practice field, taking a personal interest in Leggett.

Ebenezer Ogundeko
RS So. Defensive End
#1 6-3, 250
Brooklyn, NY
View Full Profile , who is vying for one of the starting defensive end spots, was very vocal during the first part of practice.